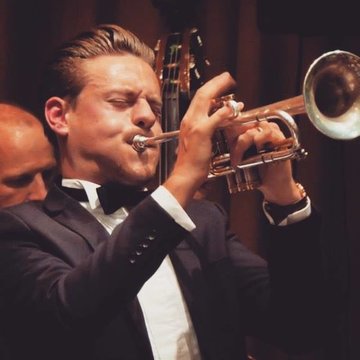 It all began at Primary school at the age of 9 when Jamie was offered brass lessons at his school, he opted for the Trumpet but to start was lent a cornet from the school as that was what was available at the time. He quickly took to the cornet, and began to study for his grades with his teacher. He continued along the ‘traditional method’, learning the ropes in his local brass band at Porthywaen, and eventually became principle cornet in the Youth band and progressed to the adult ‘silver’ band. When Jamie was 13, he formed his first band ‘The JB Quintet’ and the following year recorded his first CD ‘No Animals Were Harmed. After many years of competing, performing and parading with the brass bands he left the brass band world and joined a big band that rehearsed on Monday nights in Wrexham, the famous ‘The Bill Basey Big Band’. Jamie later met saxophonist Liam Byrne at ‘Alexanders Jazz Club’ in Chester and being the two ‘younger’ guys on the scene got together to start their own band together, which became ‘The Brownfield Byrne Quintet’ or ‘BBQ’. In 2016 Jamie formed his own group, The Jamie Brownfield Quartet”. They recorded their first CD ‘Go Down To New Orleans’ in 2016 and we were awarded a place of the ‘Jazz North’ scheme in 2017, allowing them to tour the North of the country with extra funding. Other than his own groups, he regularly appears as a guest with house rhythm sections and clubs, festivals, shows etc. Variety is key and he performs in horn sections for weddings, parties & concerts with larger pop groups and I am regularly in the studio for session work working with various talented artists. Jamie has now been playing professionally now for many years touring the jazz festival & club circuits in the UK & Europe, as well as backing vocalists, TV and session work. In 2012 Jamie was awarded 1st place in the ‘Rising Star’ category of the British Jazz Awards.In 2017 British Airways launched their new service from Heathrow direct to New Orleans and I was lucky enough to be chosen by John Cleary & Yolanda Brown to perform onboard the aircraft at 36,000ft during the crossing along with Nicole Scherzinger. There are too many to list but some other past engagements include : Performing for the Royal Princess of Jordan’s Wedding Leeds First Direct Arena (Jane McDonald) Silverstone’s F1 Grand Prix after party to 25,000 people London Jazz Festival The Savoy Hotel, London Festivals in Marseille, Ischia, New Orleans, Sveti Stefan Montenegro, Florence, Brittany, Enkhuizen Shameless Channel 4 BBC’s The Flying Scotsman Downton Abbey’s Highclare Castle Blackpool Tower Ballroom The Arts Club, Mayfair

A Night in Tunisia
All Blues
Angel Eyes
At The Jazz Band Ball
Ain’t Misbehaving
Avalon
After you’ve gone
Autumn Leaves
All of Me
All the things you are
Basin Street Blues
Bernies Tunes
Bei Mir Bist Du Schoen
Black & Blue
Bring m SWe Sunshine
Brotherhood of Man
Bourbon Street Parade
But Not For Me
Bye Bye Blackbird
Buana Sera
But Beautiful
Careless Love
Caravan / Skaravan
Cherokee
Chinatown
China Boy
Cottontail
Daahoud
Don't get around much anymore
Dinah
Djangology
Darktown Strutters Ball
Do nothing until you hear from me
East of the Sun
Four
Fly Me To The Moon
Good Life
Georgia
Girl From Ipanema
Give me a kiss to build a dream on
God put a Smile Upon Your Face
Have You Met Miss Jones
Happy Feet Blues
How High The Moon
Honeysuckle Rose
I Can’t Give You anything
I can't believe you're in love with me
I Never Knew
I want to be happy
I’ll See You in my Dreams
I'll be seeing you
I'm Confessin'
In a Mellowtone
Indiana
It could happen to you
It Don't Mean a Thing
It Had to be you
If I had you
It was just one of those things
I've Got The World on a String
Jazz Me Blues
Jeeps jumping
Jive at Five
Joyspring
Just You, Just Me
Just Friends
Just a Little While to Stay
Little Liza Jane
La vie en Rose
Lets get lost
Like Someone in Love
Look for the Silver Lining
Louisiana
L-O-V-E
Tender
Take The A’Train
Taking a Chance on love
Three little Words / Two Little Words
Stardust
Summertime
Sunny side of the street
Meditation
Misty
Mood Indigo
My Blue Heaven
My Funny Valentine
Night Train
Oh Gee
On The Sunnyside of the street
Out of Nowhere
Perdido
Pennies From Heaven
Puttin’on the Ritz
September in the Rain
Singing The Blues
Skylark
Sharaks Corner (Blues)
Strutting With Some BBQ
Straight no Chaser
Smile
Softly as in a mornng sunrise
Someday you’ll be sorry
Sweet Georgia Brown
Sweet Sue
Tangerine
Tea for Two
There will never we another you
Things ain't what they used to be (Blues)
Young at Heart
Quiet Nights of Quiet Stars
Way Down Yonder in New Orleans
West End Blues
When it’s Sleepytime down south
Where or When
When You’re Smiling
What is this thing called love
Who’s Sorry Now
Why
Whoopin’ Blues

Thank you guys for an amazing performance last week. It was prefect and everything we could have hoped for. All the best for the future

Hi Jamie, I just wanted to say a huge thank you to you and the band for playing at our wedding. Sorry we didn't get a didn't to catch up on the day, we wish we had been able to sit a listen to you all afternoon! You were all so smart and professional and sounded fab!! I hope we can find an excuse to book you again soon, Sarah and Jamie x

A sickeningly talented trumpet player and bandleader Jamie has toured far and wide in his 26 years and has gained for himself an entirely justified reputation for playing great jazz with a flawless technique and wonderful burnished tone delivered with an edge of the seat excitement that mas made him a favourite of jazz audiences all over the UK, Europe and the US

Jamie – we believe – is one of the finest young trumpet players in Europe today. His mastery of the instrument is self evident, a superb tone, great ‘language’ and he’s one very impressive figure out front with any ensemble. Cutting his teeth in a silver band as a youngster and styling through his classical grades, Jamie took to jazz like the proverbial duck to musical water and he is featured at nearly all of the jazz festivals and venues throughout UK and Europe either with his own very capable quartet or as a guest soloist