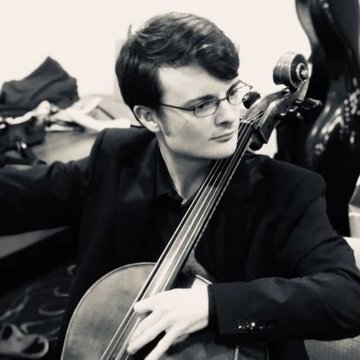 James is a graduate of the Royal Conservatoire of Scotland and the Royal Northern College of Music, currently a freelance 'cellist.

James was born in the North East of England, attending school in Whitley Bay near the coast and receiving his first musical training from a young age, taking piano lessons and singing as a treble in his church choir. He began learning the 'cello at the age of 8, taking lessons in school before joining the Sage Gateshead's Weekend Music School in 2005, studying 'cello and chamber music under Rosie Biss of the Northern Sinfonia. Whilst at the Sage, he was simultaneously a member of the Young Sinfonia, the award-winning youth orchestra of the Northern Sinfonia, with whom he played for three years, touring internationally on multiple occasions. Following his move to Glasgow, he became a member of the National Youth Orchestra of Scotland, with whom he toured Ireland, the Netherlands, Poland and Germany, as well as performing as principal' cellist in 2011 during a Tour which included a performance at the Three Choirs Festival. He began studying at the RSAMD (now RCS) in 2008, where he studied 'cello under Robert Irvine, and baroque 'cello with Alison McGillivray, as well as having partaken in masterclasses with Johannes Goritzki, Alexander Baillie, Louise Hopkins and Paul Marleyn amongst others. Whilst a student, he performed as principal 'cellist with all of the Conservatoire's orchestras, and gained success in various internal competitions, including the Ian D Watt Award, Mabel Glover Quartet Competition and Governor's Recital Prize for Strings, as well as being a finalist in the Conservatoire's concerto competition. In 2013, James received the "British Reserve Insurance Prize" for early music, as a result of his performance and research in the field of early music, culminating in a scholarly performance in both 'cello and viola da gamba. James obtained his BMus (Hons) in the summer of 2012 with a 2:1 honours classification, followed by a Postgraduate Diploma in Performance the following year. James completed his Master of Music at the Royal Northern College of Music, studying under Victoria Simonsen, as well as receiving further masterclass tuition from Hannah Roberts and Miklos Perenyi. He performed as principal 'cellist with both the Chamber and Concert Orchestras, and was a finalist in the Weil Prize for Chamber Music. James is an increasingly active pit player, performing in a wide variety of musical theatre productions throughout the UK; musicals he has performed include Dogfight, Jekyll & Hyde, The Last 5 Years, Les Miserables, Oliver!, Singing in the Rain, The Sound of Music, West Side Story and White Christmas amongst others. In 2018 he performed in a new professional production of "Return of the Soldier" at Hope Mill theatre, in the year marking the centennial of the end of the first world war; the production was critically acclaimed in the UK media. At present James is based in Manchester, regularly performing as a freelance orchestral and chamber 'cellist, and is readily available for engagements around the UK. He has experience working and performing with the BBC Scottish Symphony Orchestra, Scottish Opera, Royal Scottish National Orchestra, the Halle, Opera North and the Dunedin Consort.

Generally bookings taken are for myself alone, as I am not affiliated with any groups full-time.

Just make sure you let me know as soon as possible, if I have booked a train to the engagement it may accrue a small extra charge for altering my booking for example.

Usually I won't require a great deal of set up time, but tend to arrive early to events anyway.

The only thing I won't bring with me is a chair, other than that everything I require on the day I will provide myself unless I have made prior arrangements with the venue in question.

Yes, if there is a particular piece or song you would like me to perform, I can prepare this given enough time, though an extra fee may be included for this.

I have performed all over the UK at a wide variety of venues from stately homes, churches and converted barns to major concert venues such as Bridgewater Hall, The Sage Gateshead, Symphony Hall in Birmingham and the Ulster Hall in Belfast.

Over the years I have performed at a number of high profile gigs with big artists, including performances with Jon Lord of Deep Purple, Brian Johnson of AC/DC, Ministry of Sound, Faithless, Marcella Woods, Jimmy Nail and Tim Healey.

We hired James for our wedding reception. James got in contact with us promptly and his communication in the run up to the wedding day made us feel confident he could deliver exactly what we wanted. He was very easy to work with. On our wedding day James arrived in plenty time to set up. The first piece of music was Suite No. 1 for cello by Bach - James timed this perfectly with our entrance. Looking back his performance helped create an elegant atmosphere during the whole reception.

James was exceptional in all aspects of the job.

James played beautifully at our wedding. He was a pleasure to deal with from start to finish.

DS
David B
9 years ago

James played beautifully at our wedding. He was a pleasure to deal with from start to finish.