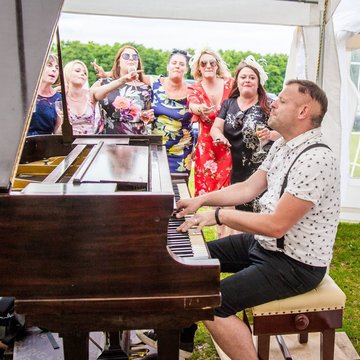 Started of playing and singing in pubs. After meeting my saxophonist wife (in 1999) we formed a band who have played for The BBC, ITV, The Football Writers Guild honouring Stephen Gerrard, Wayne Rooney and Thierry Henry. We've played at the Burj Al Arab, Disneyland Paris and many notable European venues.

A crazy musical genius who, on his own, gets big crowds dancing and singing. Epic guy

He sings, he plays many instruments and he interacts with the audience; young and old. Great repertoire !