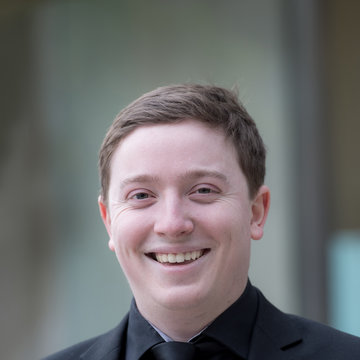 James Robinson (tenor) graduated with distinction from the Guildhall School of Music and Drama, having done his undergraduate degree in music at Gonville and Caius College, Cambridge. A versatile artist, he works extensively both as an ensemble singer and a soloist. James was named one of Tenebrae’s Associate Artists for 2016/17; and has subsequently worked with many of the country’s top ensembles. Recent projects include work with English Voices, Solomon’s Knot, Ex Cathedra, Tenebrae, Siglo de Oro, The OAE, The Hannover Band, and The Gabrieli Consort. Upcoming projects include further work with Solomon’s Knot and with the BBC Singers. He has also worked in Europe with Le Concert D’Astree and Morgens Dahl Kammerkor. His solo work has included Britten's St Nicolas, Bach’s B Minor Mass at the St Endellion Easter Festival, Handel’s Israel in Egypt at the Southwell Music Festival, Monteverdi’s Vespers in Llandaff and Winchester Cathedrals, and Bach’s Christmas Oratorio at Birmingham Town Hall. He recently evangelised for the first time in Bach’s St Matthew Passion at the Hampstead Music Festival. Upcoming solo engagements include Bach's St John Passion at Birmingham Symphony Hall for Ex Cathedra, Evangelist in Bach's St John Passion for Hampstead Music Festival and Eastbourne Choral Society, and Handel's Israel in Egypt in London. His operatic roles include both Damon and Acis in Handel’s Acis and Galatea, Schoolmaster in Janáček’s Cunning Little Vixen, Male Chorus in Britten’s Rape of Lucretia, and The Madwoman in Britten’s Curlew River. Other recent solo projects include work the Kreutzer Quartet, recording and performing a new piece by David Matthews, and a recording of Robin Holloway’s music for the Delphian label to celebrate the composer’s 75th birthday. He has also recently performed Brahms Ziegeunerlieder with The Prince Consort at the Wigmore Hall, and premiered a new arrangement of Schumann's Dichterliebe for string orchestra with Echo Ensemble. He fills his spare time by teaching, playing football (as an erratic goalkeeper) and following the misfortunes of Charlton Athletic.