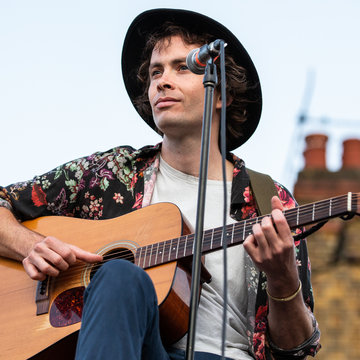 James Riley is an award-winning troubadour, songwriter and studio artist from London via Nashville, bringing quality and joy to every gig.
3 of 5 photos
Singing guitarist
London
Public liability insurance of £1 million

Performance is how I make my living, but it’s also my vocation! It has always brought me a sense of joy and connection, and I love nothing more than communicating with an audience through song, and sharing that joy with them. I’ve performed literally thousands of gigs over the years, from London to Istanbul, New York to Nashville. I’ve busked on the streets of countless cities and I’ve played to audiences of thousands at festivals & in stadiums. When lockdown happened and my UK tour was cancelled I started livestreaming concerts on my roof in North London, which was covered by the BBC and the Guardian. I’ve performed with some of the greats like Billy Joel and Buddy Guy, I’ve won awards from the Mayor of London, the Coffee Music Project & Arts Council England. I was born in south London, but I’ve lived all over, and I spent a few years in Nashville whilst I was writing my most recent record. I grew up listening to my Californian Mum’s record collection, which introduced me to the likes of Bob Dylan, Joni Mitchell, James Taylor Nina Simone & Paul Simon. A lot of the music I write is influenced by these great American songwriters, but a good deal of it owes a lot to British influences like Sting, John Martyn, Richard Thompson and Annie Lennox. Over the years I’ve picked up songs of all stripes, from country to soul, folk to jazz, bluegrass to reggae. If you’ve got a request I’ll probably know it! I play with several different bands at the moment, but I love the opportunity to play a solo show and connect with an audience on an intimate, personal level. “Incredible” Huw Stephens, BBC Radio 1 “A folk genius” Janice Long, BBC Radio Wales “One of my highlights of the year” Verity Sharp, BBC Radio 3 “Absolutely fantastic” Kev Jones, Bear’s Den/Communion “A genuinely gifted and self-assured vocalist and songwriter". - The Upcoming “Exquisite” Ear To The Ground Music “Awesome… like the Allman Brothers meets the Seeger Sessions” Laura Marling “We are in awe of the sheer beauty and lyrical capacity” Wolf In A Suit “It hooked us on first listen…from the harmonies to the guitar work there’s nothing to not like” Folk Radio UK “Riley writes with a deftness often reserved for musicians twice his age” Addict Music “James Riley won’t be one of the best kept secrets on the London folk scene for much longer” For Folk’s Sake

“Awesome… like the Allman Brothers meets the Seeger Sessions”