COVID-19 - we’ve adapted and we’re here to help you.
Trumpeter 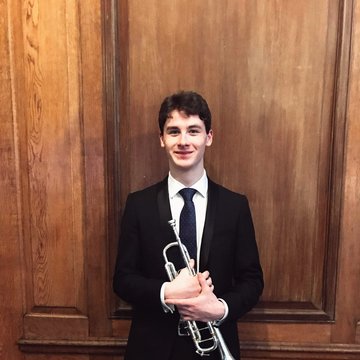 James is a Trumpeter player with a strong orchestral and show background looking for work.

James Kelly was born in Oldham and began playing the trumpet aged 7. He joined the Oldham Music Service when he was 9 and progressed through the various bands and orchestras at the service, eventually holding the Principal Trumpet Seat in the Youth Orchestra and Wind Band , also playing Soprano Cornet and Flugel with the Youth Brass Band. He toured many countries including The USA, Italy and Germany and frequently played solos in many venues. He held the position of Principal Trumpet in the Hallé Youth Orchestra from September 2017-August 2018, which included 4 concerts, one of which was A side by side with the whole Hallé and A Tour to Lake Garda & Verona in Italy. Through this time James studied with Duncan Byers, Jonathan Leedale, Roger Meadon and Murray Greig. In September 2018, James was awarded a Trinity College London Scholarship and a place to study Trumpet at Trinity Laban Conservatoire of Music and Dance. Since joining Trinity, James has studied with Andrew Dunn, Bob Farley, Tony Cross and Andy Hendrie. He is also a member of the prestigious Royal Greenwich Brass Band and regularly freelances across the country including work with the YMSO, ERSO and ULSO. James has also performed in masterclasses with some outstanding trumpet players including Allen Vizzutti, Mark Bennett & Jason Evans. In summer of 2018 James was lucky enough to perform in The First Night Of The Proms at The Royal Albert Hall as part of the Proms Youth Ensemble , premiering a brand new piece written by Anna Meredith.