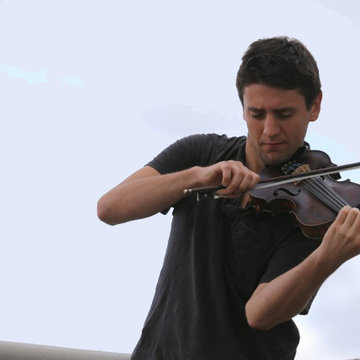 A London born multi-instrumentalist, he creates folk music that dances the line between tradition and irreverence.
3 of 6 photos
Fiddler
London
Public liability insurance of £10 million

London born multi-instrumentalist James Patrick Gavin creates folk music that dances the line between tradition and irreverence, London and Ireland, groove and grace. Known for previous work with TEYR, The Rad Orchestra and Jez Hellard & The Djukella Orchestra, his debut solo album CHEWING THE FAT was released in February 2018 to wide acclaim. Described as “magnificent” by FolkRadioUK, the record contained a wealth of new and old material that weaved together three generations of his own Irish family. The new album CHEWING THE FAT blends folk tunes, songs, spoken word and field recordings in an ode to roots and identity. It’s a unique sonic world that both showcases his instrumental skill, compositional prowess and his broad talent for collaboration. The nationwide album launch tour was kicked off in London with a sell-out 11-piece show at the Union Chapel. CHEWING THE FAT features an award winning host of guests including singers J. Eoin, Seamus Gavin and Jez Hellard, accordionist Tommie Black-Roff, bouzouki and bodhrán player Tad Sargent, flautist Orlaith McAuliffe, piper Dominic Henderson, guitarist Adrian Lever and banjoist Hugh O’Niell. This unique gathering of some of the UK and Ireland’s finest folk musicians presents a rare joining-of-dots between innumerable bands from previous decades.

I have performed in venues all over the world. From the Union Chapel to house concerts in Germany.

In 2018 I launched my debut album in the Union Chapel.

We always try our best to be flexible to help ensure your event runs as smoothly as possible. If timings change slightly in the run up to the event just let me know.

I can provide some music from a device over the PA. I would add that I am not a professional DJ.

I am happy to chat through my set and make sure we find what works for your event.

I can, however this is subject to how much time I have before the date of the performance or event.
James

4.9 out of 5
15 verified reviews
Satisfaction

James was fantastic at my husband's 60th Irish themed birthday party. He joined in with the whole spirit of the event and made the whole thing truly memorable. We loved his playing, his easy going manner and felt like he was instantly a friend who'd come to play instead if a musician we'd found on the Internet. Top marks and we hope to engage him again sooner rather than later. Thanks James, you were and are superb. The Kelly family and friends.

Great for our Irish drinks reception!

James performed at our wedding and did not disappoint! He performed at the drinks reception and really helped make our day extra special.

PD
Peter D
3 years ago, for a Wedding in The St

"Three Dollar Shoe were fantastic at our wedding: great sound, great music, a great caller and infinite patience - we were terrible on the dance floor. Everyone loved it"

G
Gary L
3 years ago, for a Birthday party in Shaftesbury Ave

Fantastic stuff lads! Thank you so much for playing at my birthday party at the Apollo Theatre. It was a perfect mix of Irish songs and contemporary songs. Especially loved the Dire Straits one! Many many thanks! Gary x