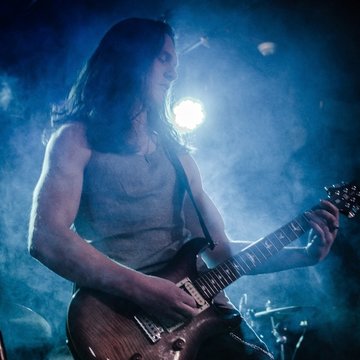 James is a session guitarist based in the North West. He has extensive experience live and in the studio.
3 of 5 photos
Guitarist
Bolton

Designing the ‘Clean Up’ patch for Blackstar’s Silverline Series in 2019, James is a UK based guitarist who has worked with a number of artists live and in the studio, as well working as a freelance gear demonstrator for a number of major companies. Having started playing guitar at the age of 7 James’ taste in music is as widespread as his taste in guitars, and enjoys playing anything from pop to country to rock. In November 2019 James will be releasing his signature guitar with Ambler Custom Guitars, which he pairs with the Blackstar Artist 15 live and in the studio. James has also played in his fair share of musicals in Manchester and the West End, including Hair, Spring Awakening and Tick Tick Boom, along with a memorable performance at the Royal Albert Hall at the Music for Youth proms age 22. His debut album is due for release at the end of 2019 which he describes as ‘amalgamation of all musics, with orchestral sections flowing into acoustic piano and guitar arrangements followed by heavy drop tuned riffs, with sections where one note over 10 seconds is appropriate, and others where 10 notes in one second is equally justified.

James is an extremely talented guitarist with a very professional attitude, a great asset to our exhibition stand

Tick Tick Boom the Musical -Bretherton leads the music from behind the keyboard, with James Frankland, Mark Griffiths and Adam Sheffield making up the rest of the band. They make a cracking sound in a small space, and wring every ounce of energy from the varied score