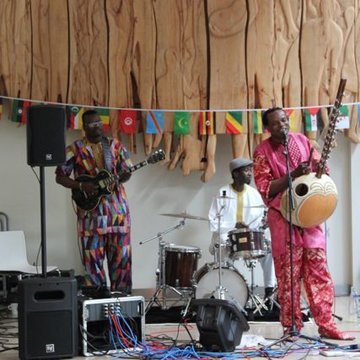 The Coute Diomboulou Band led by Cissokho is composed of musicians, mostly griots, from the old Mande Empire of West Africa.

The Coute Diomboulou Band led by Cissokho, (who formed the group in Senegal in his early teens) is composed of musicians, mostly griots, from the old Mande Empire of West Africa. They play a mix of traditional instruments including the kora, tamma and djembe with modern counterparts: electric guitar, bass, and drum kit. Band members have also collaborated with many internationally famous artists including Senegal’s super star Youssou N’Dour. Deep in the heart of this band is the trance-inducing sacred rhythms that invoke other worlds, that call down the spirits, but at the same time bring together the heart of ancient Africa and the bustling energy of modernity. The music is an extraordinary mix of Senegalese mbalax, afrobeat, complex, grounded in African traditions – and indescribably funky. One constant throughout is Cissokho’s extraordinary kora playing, demonstrating how he picks three parts at once: bass line, melody and improvisations above them, mixing fearsome technique with a deep humanism and ability to improvise scintillating runs out of thin air.

RB
Robin B
3 years ago, for a Concert in Ipsden

Great to have Jali Fily Cissokho's Coute Diomboulou Band back again. He mesmerized the audience with the rippling sounds of his kora and got them up on their feet dancing to the funky Afrobeat sounds of his band. Definitely have them back again" Joe & Robin Bennett, event organisers, www.woodfestival.com