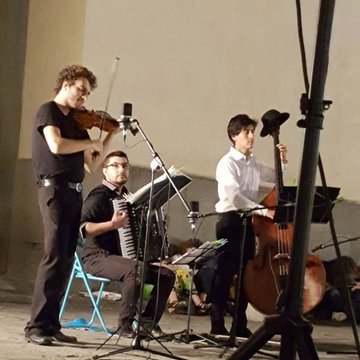 I am a violinist currently doing a Masters in performance at Royal Academy of Music in London. Really happy to play in any kind of event.
Violinist
London
Public liability insurance of £10 million
Verified profile

Jacob Ventura started his musical training at the age of four in Music School of Sanremo. At the age of seven, he moved to Tuscany where he continued to study violin with Lorenzo Borneo and later with Miriam Sadun at Cherubini Conservatoire in Florence. He graduated with top marks under the guidance of Alberto Bologni at the Boccherini Conservatoire of Lucca, and then was tutored by Professors Felice Cusano and Olexandr Semchuk. In 2016, after an inspirational masterclass in Sardinia, where he worked closely with great performers such as Roman Simovic, Gordan Nikolitch, Ivry Gitlis and Olga Sitkovetsky, he decided to move to London following a suggestion from Simovic, and is currently attending a master’s program in Violin Performance at the Royal Academy of Music in London with Alexander Sitkovetsky. Being in the UK from September 2017 he has already collaborated with the London Sinfonietta, Brandenburg Sinfonia, Hastings Philarmonic, Musica Poetica and performed in concerts with Edward Gardner, Pascal Rophé, Richard Lester, Joe Leader, Gary Levinson, Rachel Podger, Marie Pierre Laglamet, ecc... Before joining the UK, Jacob was involved in performing with several Chamber groups and Orchestras in many European Countries: France, Poland, Germany, Austria, Switzerland and Italy. During his high formation he performed in concert with musicians like Giuliano Carmignola, Mario Brunello, Enirco Dindo, Thomas Muller, Giulio Plotino, Augusto Vismara, Lorenza Borrani, Denis Shapovalov and Alessandro Cappone, and collaborated with conductors such as Riccardo Muti, Herbert Handt, Ari Pelto, John Axelrod, Kevin Class, Massimiliano Caldi and Giovanni Reggioli. Jacob has played as Soloist with the Toscana Classica Orchestra, Artes National Orchestra, Bellagio Festival Orchestra, Mahler Academy Festival Orchestra and Castrocaro Classica Orchestra, performing Concertos and virtuoso pieces from W.A.Mozart, F.Mendelssohn, A.Vivaldi, J.S.Bach, P.Sarasate, N.Paganini, E.Morricone. He has won awards in the following competitions: Nelio Biondi of Macerata, Caffa Righetti Cortemilia, a competition in memory of Vittorio Chiarappa held in Florence, the contest Riviera della Versilia and the Chianti Music Competition. As a chamber musician he has lead the Monsignani String Quartet, playing classical and romantic repertoire in many Italian Festivals. In addition, he performed contemporary repertoire between Pierrot Lunaire of Schoenberg (1912) and the most recent premieres with "In Flame Artists" in Florence and with the artists of "Teatro Valle" in Rome.

Having Jacob violin's voice playing during my wedding has been one of the most emotional and fulfilling moments I have ever had, and I felt lucky to share such a great performance with all my relatives and friends in that special moment. Later all the guests came to appreciate so much the music of the ceremony, most of them couldn´t avoid tears.

Was in the great concert dedicated to The Beatles with live orchestra that I came to know Jacob Ventura. He was on the stage reviving the music of my favorite band with an artistry I have never seen before. After the concert I was lucky to come to know him personally through a friend I have in common with him. Afterward I decided to envite him to play for me some private events, and over time we became very good friends. Jacob is a wonderful artist as well as a lovely person. Best of luck to you :)

Dear Jakob, it was an extraordinary experience to listen to your virtuoso violin. I shared your act with my daughter who was also impressed. There is serious genius there. I hope I will be able to organize a ‘street music genius ‘ festival soon.Whatever I will do or not, you are deemed for greatness. Paul

Having Jacob playing as a soloist the Vivaldi Four Seasons was an extraordinary experience. As artistic director of the Lugo Music Festival in Italy I have to do with many artists all over the world, but he is the one able to conceive technique and passion in an unique sound.