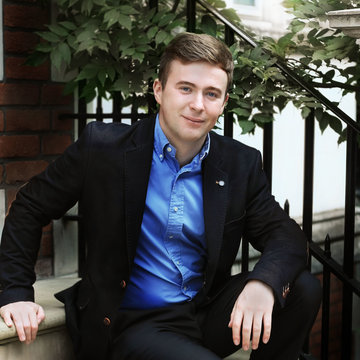 Jack’s early musical life began with playing guitar and singing in bands as a child in his home town on the Isle of Wight, playing the pits of local musicals and then finally embarking upon what would become a more serious career with singing in local musicals and operettas. After a whirlwind year of musical theatre shows, concerts and competitions, Jack found his classical voice under his first teacher, Samantha Howard, and no more than 6 months after he had learnt his first operatic aria, was successful in gaining a place on the undergraduate vocal studies programme at The Guildhall School of Music and Drama. Following a successful first year at the Guildhall under the tutorage of David Pollard, Jack won the Joyce Budd Second Second Prize of the Kathleen Ferrier Bursary for young singers to whom he is very grateful for having supported him through his degree. Having now finished his undergraduate degree with a First Class Honours, Jack looks forward to continuing his development as a freelance singer. Recently performed roles include Lensky (Eugine Onegin) and Don Ottavio (Don Giovanni) for Opera Loki, Fe-ni-han (Ba-ta-clan) for West Green House Opera, Nanki-Poo (The Mikado) for Charles Court Opera and The Island Savoyards, Monostatos (The Magic Flute) for GSMD & Opera Anywhere, Edmondo (Manon Lescaut), Basilio/Curzio (Le Nozze di Figaro), A fan of operetta, Jack was delighted to reprise the role of Richard Dauntless in Ruddigore for the 2015 International Gilbert at Sullivan festival in Harrogate. On the Oratorio platform Jack has performed, most notably, as the tenor soloist in Handel’s Messiah with several choirs including the East Sussex Bach Choir, Seasons (Haydn), Creation (Haydn), Ode for St Cecelia’s Day (Handel), Ode to St Cecilia (Purcell), Dvorak’s Mass in D and Christus (Mendelssohn). Ensemble credits include the UK premiere of Dove’s The Monster in the Maze with the London Symphony Orchestra, under the baton of Sir Simon Rattle, The Return of Ulysses (Royal Opera), Un Ballo in Maschera (Grange Park Opera), Roméo et Juliette (Grange Park Opera), Fidelio (Longborough Festival Opera).

singer (Tenor)s in the UK