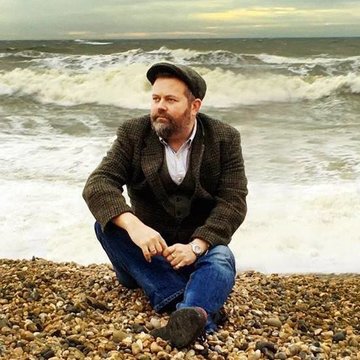 "Take about two cups of Johnny Cash add a dash or two of Tom Waits, and a smidgen of the psychobilly or punk roots that began molding him years ago, and you have Jack Cade." Jack Cade puts his musical leanings down to a mixture of watching Sergio Leone westerns far too many times and his early years spent sitting in his grandparents kitchen on a Sunday afternoon, whilst the roast dinner was in full swing, with the radio spewing out any number of country tunes. His latest album 'Bear Bones' was released in the summer of 2019, this is what the press said: '...Cade has created a stellar album.' Maverick Country Music Magazine '...‘Bear Bones’ is one captivating listen.' americana-uk.com '...Such is the quality and depth of the songwriting and music on this record it could be described as Cade’s very own ‘Nebraska'.' folkandtumble.com

A terrific Americana album... Listening to Bear Bones is certainly a fulfilling experience. What’s immediately striking are Cade’s vocals, which are exemplary. When you combine that with songs really standing out, you’re onto a winner, especially when the musicianship is very, very good... ...make no mistake, Cade has created a stellar album.

Jack Cade will never be accused of having a golden throat. Imagine Kris Kristofferson in a heated argument with Tom Waits, Captain Beefheart, and Johnny Cash. If it helps, or just for fun, picture the gigantic yellow bear head that graces the cover of his second solo album, ‘Bear Bones,’ as the singer of the songs within. Once you get it, though, you’ll be glad you stuck around, because ‘Bear Bones’ is one captivating listen... ...‘Bare Bones’ is not so much a departure for Cade as it is an evolution. He’s learned to channel the dark and acoustic tones of his earlier work into a more accessible sound, yet it remains raw and powerful. By making many of these songs rock-based and hook-heavy (and the songs stay with you long after the album’s over), Cade has guaranteed his music will reach a wider audience without compromise – every artist’s ultimate dream.

Delivered in vocals that sound like they belong to a grizzled veteran bar singer who has just gargled with whiskey and broken glass before taking to the stage in a Nashville tavern, the voice actually hails from North Kent and has stopped of in Reading en route to his current home in Brighton. Cade uses his real-life English experiences of economic decline and unemployment and marries it to the various musical tropes of mythic Americana, full tales of hard-won victories over life’s injustices, redemption, salvation and hope, in the tradition of Cash, Dylan and Waits,

Bear Bones’ has a great alt-country sound that mixes good rocking tunes with laid back poignant melodic Americana. Cade has a voice that sounds like the illegitimate offspring of Johnny Cash and Tom Waits, and his strong personal lyrics show empathy with everyday feelings and situations. While sounding deceptively bleak at times, the record delivers an upbeat message of hope and encouragement. Such is the quality and depth of the songwriting and music on this record it could be described as Cade’s very own ‘Nebraska’.

...he kicks off with the midtempo Kristofferson-ish 'He Lies On His Side' (thereby prompting the lyric "he don't know which way to turn"), subsequently channelling Cash for his delivery of Dust, echoing John Stewart on the anthemically muscular 'Who Will Be The First To Fall' and Springsteen /Warren Zevon with 'She Got Something To Say. The latter's one of the heavier, more muscular and rockier numbers, an approach only revisited on album closer, Stripped (from whence the album title comes), otherwise this is more acoustic and ballad focused, highspots coming with the dobro-shaped 'When You Come Running' and the simple fiddle-waltzing strum of 'Four Letter Word, another echo of Cash in its cowboy campfire tones.

melting point of jazz, country and soul like taking a walk down Bourbon Street, drinking in the sounds from all the bars and juke joints.

'Shakedown' is a great introduction to the Everyday Sinners, and Cade’s distinctive voice in particular. It is a collection of thought-provoking well crafted songs, superb musicianship, and energy a plenty. But on further, deeper listening, it unveils itself as something of a protest record with astute social commentary, all wrapped up in some damn fine tunes. So it works on both levels, aiming for a shakedown that contemporary society, the world over, desperately needs. Guys, you have a new fan

The Everyday Sinners proudly marches in a long and distinguished lineage of British protest music that combine celebration with hard truth. The chug-a-lug of the bass and nimble rhythm guitars throw back to American roadhouses and gospel churches, but the lyrics are staunch reminders to hurl yourself against corruption.

If distinct is what you are after then Jack Cade has it in spades. From the moment he opens his mouth on the opening track "Yella Green Grass" you realise that convention is out of the window. Songs are delivered in a deep growly drawl with Cade making a virtue of a voice so raw that it almost makes Johnny Cash seem operatic and Dylan the voice of an angel