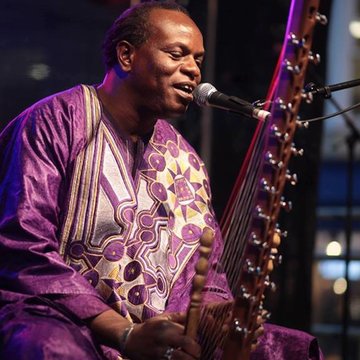 One of Senegal’s renowned musicians from the ancient family tradition of kora players, Cissokho, in addition to playing solo traditional Mande music, has also performed and recorded in many cross-cultural settings and festivals, in Senegal, Europe and UK (main stage Glastonbury /Womad ). His diverse collaborations include Toumani Diabate/ Baaba Maal/ AR Rahman (Bollywood film) and Will Gregory (Goldfrapp). The Coute Diomboulou Band led by Cissokho, (who formed the group in Senegal in his early teens) is composed of musicians, mostly griots, from the old Mande Empire of West Africa. They play a mix of traditional instruments including the kora, tamma and djembe with modern counterparts: electric guitar, bass, and drum kit. Band members have also collaborated with many internationally famous artists including Senegal’s super star Youssou N’Dour. Deep in the heart of this band is the trance-inducing sacred rhythms that invoke other worlds, that call down the spirits, but at the same time bring together the heart of ancient Africa and the bustling energy of modernity. The music is an extraordinary mix of Senegalese mbalax, afrobeat, complex, grounded in African traditions – and indescribably funky. One constant throughout is Cissokho’s extraordinary kora playing, demonstrating how he picks three parts at once: bass line, melody and improvisations above them, mixing fearsome technique with a deep humanism and ability to improvise scintillating runs out of thin air. JALI FILY CISSOKHO-kora/vocals (Senegal) AMADOU DIAGNE-drum kit/tamma (Senegal) SYLVAIN NDIAYE-guitar (Senegal) SUNTOU SUSSO- djembe (Gambia)

NEW!Virtual services
Personalised Music Message
Book me to create a unique music video for you to send to a friend as a gift. This could be a birthday message, first dance song for a wedding anniversary, or just your friend's favourite song to cheer them up.
£15
JALI

4.8 out of 5
3 verified reviews
Satisfaction

RB
Robin B
3 years ago, for a Concert in Ipsden

Great to have Jali Fily Cissokho's Coute Diomboulou Band back again. He mesmerized the audience with the rippling sounds of his kora and got them up on their feet dancing to the funky Afrobeat sounds of his band. Definitely have them back again" Joe & Robin Bennett, event organisers, www.woodfestival.com

TOUMANI DIABATE “I love Fily’s voice. He understands my music. We are both griot.”

Koras in the UK

Koras in the UK
Koras in Oxford
Koras in Buckinghamshire
Koras in Milton Keynes
Koras in Swindon
Koras in Reading
Customer Service
Discover
Company
As seen on
© Encore Technologies, Ltd.
Crafted with bagels and in London