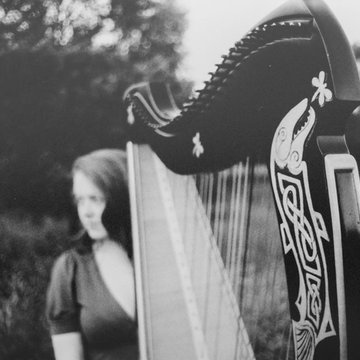 Isbel is an accomplished and highly experienced clarsach player and composer working throughout Scotland.

Isbel, an accomplished and experienced musician, has been playing the Clarsach for 20 years. Whilst her primary interest is in Scottish traditional music she enjoys to play a wide variety of styles from Paraguyan harp music to Bluegrass. She graduated with a 2:1 from Strathclyde University in 2013 in their Bachelor of arts; Applied Music Honours degree and as part of this course studied performance, composition, film scoring, music history, theory and orchestration. She has subsequently earned a Post Graduate Diploma in Education and is currently working as a Secondary music teacher. Isbel has extensive and impressive performance experience ranging from launches, celebratory dinners, weddings, festivals and exhibitions. She has performed at events in the Uk such as the Tartan Heart Festival (Belladrum) in the Highlands and the Celtic Connections festival in Glasgow. Outside of Scotland, Isbel has performed in a variety of venues globally; from Lorient, France at the popular Interceltique music festival to the prestigious members-only Metropolitan Club in New York.

TRADITIONAL (examples..)
- Leaving Stoer
- The Swan
- Highland Cathedral
- Mhairi's Wedding
- Marnie Swanson of the Grey Coast
- My love is like a red rose
TV & FILM (examples..)
- Kissing you, Romeo and Juliet
- Game of thrones theme
- Glasgow love theme, Love actually
- Under the sea, Little Mermaid
- Beauty and the beast theme,
- You've got a friend in me, Toy story
MODERN (examples..)
- Can't help falling in love, Elvis
- Your song, Elton John
- All of me, John Legend
- No place I'd rather be, Jess Glynn
- Reach for the stars, S Club 7
CLASSICAL (examples..)
- Pachabels cannon
- Trumpet voluntary
- Ave Maria

“Isbel’s harp playing was one of the most beautiful parts of our wedding day. In the midst of all the riotous fun there was a period of such peace, people were bewitched”

'Isbel kindly played for us during our wedding ceremony & we couldn't have been happier. Not only was her music amazing but she even took the time to learn two songs just for us (S Club's reach sounded beautiful on the clarsach!)'