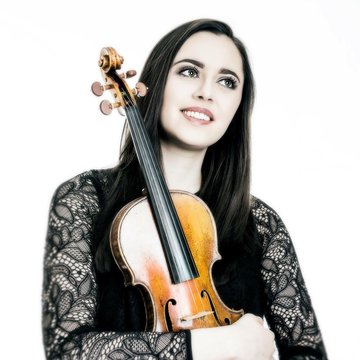 Iona is a 20 year old violinist from Scotland currently studying at the Royal Academy of Music in London.
3 of 8 photos
Violinist
London

Iona has been playing violin since she was 4 years old, beginning with the Suzuki method and studying with Ms Brenda Smith of Ayr. After six years of study at Chetham’s School of Music with Ms Yumi Sasaki, Iona now studies at Royal Academy of Music with Giovanni Guzzo. Born in Dumfries, and with her early education in Moffat, Iona is a well known young musician around Dumfries and Galloway, regularly taking part in festivals, charity and fundraising events. Studying at Chetham’s School of Music presented Iona with many performance opportunities with lunchtime concerts, her own quartet, Chetham’s Symphony Orchestra as well as community music. She also had many opportunities to perform abroad when she was selected to take part in the Commonwealth Resounds trip to Sri Lanka in Nov 2013 in schools and orphanages around the country as well as the Sri Lanka Symphony Orchestra. Her quartet were also selected to take part in an exchange to Oslo to the Barratt Due Institute in November 2014 and March 2015, studying and performing with Pavel Fisher and the Rondo quartet and with Chetham’s Chamber Orchestra at the William Walton Festival in Ischia in July 2016. Iona has been a member of National Youth Orchestra of Scotland ensembles since she was eight years old. She has led Senior Orchestra and with Symphony Orchestra she toured China in 2015 and played at the Proms in 2016. She is delighted to have been selected to be leader of Symphony Orchestra for the 2017 season. In her first year at RAM, Iona has been busy with a trio, quartet, quintet, string orchestra as well as playing new compositions, in the Jazz Symphony Orchestra and with local orchestras. Iona was successful in reaching the second round of BBC Young Musician of the Year in 2013/14 and 2015/16 and hopes to take part in many competitions whilst at RAM. Iona was a Chetham’s Symphony Orchestra Concerto Finalist in 2014, performing with Buxton Music Society in 2015 and Harpenden Musicale in 2016. She also performed Prokofiev Violin Concerto in Buxton again in summer of 2017.

You played with such calmness and authority that all fears evaporated and I was really very pleased with the show, it was a great performance.

you played so wonderfully on Saturday night. I really can't think of a more impressive performance by a soloist with our orchestra ever.