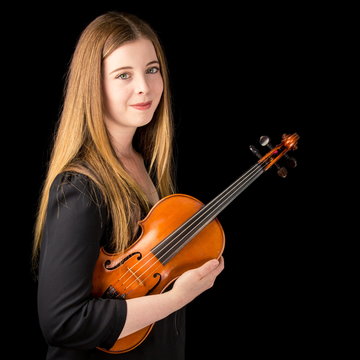 Iona is a professional violinist with experience in all styles from baroque to classical, to commercial/pop.
3 of 12 photos
Violinist
London
Public liability insurance of £10 million
Verified profile

Violinist Iona Allan holds a wide range of professional experience having performed in venues ranging from stadiums, to major concert halls, to Buckingham Palace. As an orchestral violinist, Iona has performed in a variety of styles with many professional orchestras both in the UK and Australia. These include: the Ulster Orchestra, London Contemporary Orchestra, Bournemouth Symphony Orchestra, London Electronic Orchestra, Florilegium (Baroque Ensemble), Melbourne Symphony Orchestra, Queensland Symphony Orchestras, Melbourne Chamber Orchestra, and Camerata - Queensland’s Chamber Orchestra. Iona has toured professionally as part of Hugh Jackman’s 2015 Broadway to Oz tour of Australia as well as being leader of Richard Clayderman’s 2017 tour of Australia. She has also worked with the likes of pop artists Michael Buble, Anthony Callea, and Dami Im. In July 2019, Iona graduated with a Master of Performance degree from the Royal College of Music, London after receiving multiple awards and scholarships towards her studies. Finishing in November 2016, Iona completed three years in the Professional Performance Program at the Australian National Academy of Music (ANAM) under the tutelage of Dr Robin Wilson. As an alumnus of the Queensland Conservatorium, Iona competed in the 2016 Ena Williams Award for Postgraduate Study Overseas and was awarded the Major Prize. Iona holds a Bachelor of Music in Advanced Performance from the Queensland Conservatorium Griffith University, where she studied with Michele Walsh. Iona made her solo debut performing Vaughan-Williams' The Lark Ascending with the Queensland Philharmonia Orchestra in 2014.

Standard Prices
All prices include:All equimpment provided, optional Skype/Zoom consultation.
NEW!Virtual services
Personalised Music Message
Book me to create a unique music video for you to send to a friend as a gift. This could be a birthday message, first dance song for a wedding anniversary, or just your friend's favourite song to cheer them up.
£15

She was amazing and very talented.I would definitely get her again if I m planning another event.

The delicate tone, bright musical palette and the aestheticism of the musicians have left an unforgettable feeling