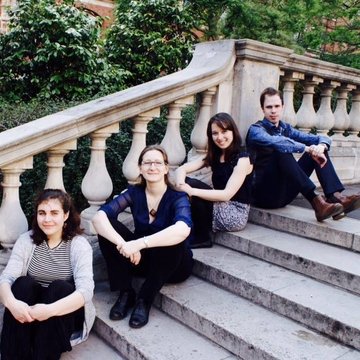 Check availability and get a free quote now - no commitment to book
From£640
Watch & Listen
About
Home page
Improviso
Like Improviso?
Watch & Listen
Watch
Listen
1 of 1 video
Castello

Founded in November 2015, Improviso are a chamber ensemble with a particular interest in improvisation alongside 17th/18thC chamber music.
3 of 6 photos
London

Improviso is an exciting and versatile young quartet who met at the Royal College of Music in London. They explore historically informed improvisation alongside performing chamber music of the seventeenth and eighteenth centuries. Praised for their inventive programming and exciting stage presence, they have appeared most recently in a live broadcast on BBC Radio 3's 'In Tune' programme, at the Styriarte Festival in Austria, and at venues all over the UK including the Wigmore Hall, Middle Temple Hall, the Holywell Music Room, Keble College Chapel, Oxford, the Deal Festival of Music & Arts, and the Brighton Early Music Festival. In September 2017 Improviso won a place on the prestigious EEEmerging scheme 2018 (Emerging European Ensembles), and are also proud to have been selected for the Brighton Early Music Festival young artists scheme and the Live Music Nowscheme. They have just completed a year as one of Wigmore Hall's Chamber Tots Ensembles-in-Residence. Future plans include a collaboration with Sam Cave, an LSO Soundhub associate composer, to create new works for the ensemble. Improviso are looking forward to a busy recital schedule in 2018 alongside a chamber music residency and concerts at Snape Maltings, Aldeburgh, residencies in France and Romania, and a performance as part of the Festival d'Ambronay.