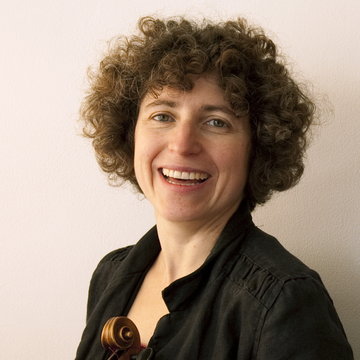 Ilana Cravitz is a violinist specialising in authentic performance of klezmer and baroque repertoire. She also plays quite a few Celtic and Scandi tunes. Klezmer Ilana is one of a handful of professional violinists in the UK playing klezmer music in the traditional style. She is the latest link in a musical chain stretching back centuries, having learned aurally from living exponents of the tradition and through recorded sources dating back to the dawn of the recording era. Ilana is also a teacher: she has introduced hundreds of people of all ages to klezmer playing through courses at the School of Oriental and African Studies (SOAS, University of London), at workshops, and at events like the Fiddles on Fire and the Genius of the Violin Festival, KlezFest London and Witney folk weekends. She takes Jewish music out to communities around the UK and her book, Klezmer Fiddle - a how-to guide, is published by Oxford University Press. Ilana was a founder member of the London Klezmer Quartet, a traditional 4-piece ensemble which has toured Australia twice, appeared live on BBC Radio 3 and performed at venues as diverse as the South Bank Centre, Vortex Jazz Club and the Victoria and Albert Museum. (Video of LKQ). She has been a guest artist with bands including the She'Koyokh Klezmer Ensemble, Klezmer Klub, and the US ensemble Isle of Klezbos. Recent forays into the world of Sephardic music and flamenco have seen Ilana working with Los Desterrados (Radio 3 World Routes recording), and Kantos, an ensemble comprising Monica Acosta (voice), Ulises Diaz Ropero (percussion), and Steve Homes (guitar). Ilana also enjoys playing English and Celtic folk music: she appears regularly with ceilidh band The Muckers, and performed the Scottish fiddle solo in the world premiere of Nigel Hess's ballet suite 'The Old Man of Lochnagar' at Sadler's Wells in October 2007. Baroque violin and gamba Ilana also performs on the baroque violin and viola da gamba, and has toured and recorded with the European Union Baroque Orchestra, The Sixteen, and Victoria Voices and Viols. She appears regularly with Cafe Mozart and Essex Baroque Orchestras, Suffolk Baroque Players and her own group, The Lantana Ensemble, and has also worked with the Parley of Instruments. You can see video of Ilana's appearances with period performance group Il Festino at St John's, Smith Square, and St James's, Piccadilly playing a Castello sonata and Vivaldi's 'La Folia'. Studies Ilana studied traditional klezmer fiddle technique with Deborah Strauss, Alicia Svigals and Michael Alpert, leading violinists in the revival of this Eastern European Jewish folk music. Her baroque violin studies included lessons with Catherine Mackintosh, Walter Reiter, Andrew Manze and Mimi Mitchell, and she also studied the viola da gamba with Richard Boothby. Ilana gained an ARCM (PG) as a result of her post-graduate studies at the Royal College of Music.

Many venues of all sizes all over the world. In the UK, venues range from the Royal Festival Hall and Kings Place to parties, weddings, bar mitzvahs, funerals, pubs, clubs and arts centres.

Yes, I can sometimes book more musicians, depending on your needs.

Given sufficient notice, I can be flexible. However, time changes of more than an hour either way may prove problematic.

If using sound equipment, 1 hour before arrival of guests or doors opening. If acoustic, no extra time.

Set lists are crafted from countless performances and learning what works best to ensure guests have a great time. However, I'm definitely happy to chat through and make sure we find what works for your event.

If a melody isn't included in my list there may still be a chance I already know it. Additionally, I offer to arrange and learn up to 3 special songs or tunes outside my normal repertoire. There is a fee of £30 per tune for this service to take into account rehearsal times etc.

Standard Prices
All prices include:Travel within London and small amplifier.