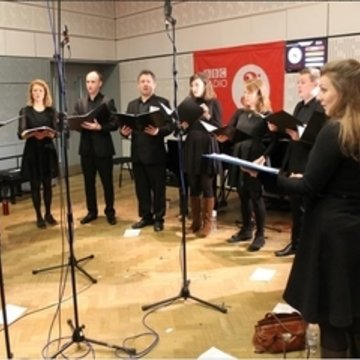 Check availability and get a free quote now - no commitment to book
From£640
Listen
About
Home page
Il Suono
Like Il Suono?
Watch & Listen
1 track

Il Suono distinguishes itself as one of today's most engaging young vocal ensembles through its passionate and dramatic interpretations of late-medieval and renaissance music, its commitment to performing new music, and the potency and originality of its concert programming, in which achingly beautiful polyphony of the fifteenth and sixteenth centuries rubs shoulders with new pieces composed especially for the group. Il Suono is developing a significant following in France, where numerous concerts throughout the country in 2010/11 have included performances of programmes crafted from the music of Obrecht, Clemens non Papa, Gesualdo, Allegri, Carpentras, Victoria, Gabrieli, Tallis, Palestrina, and Foggitt. 2011 also saw Il Suono's first collaboration with The Choir of Merton College Oxford, in a series of concerts featuring Tallis's forty-part motet 'Spem in alium'. Il Suono gave eight concerts including music by Victoria, Ravel, Burrell, and Foggitt during a tour of northern Spain in 2009. Other international engagements include concerts for the St Petersburg Choir Festival, in which the group performed Handel's and Purcell's Odes for St Cecilia's day and an a-cappella programme featuring William Mundy's large-scale showpiece motet, ‘Ave virgo sanctissima’. These took place respectively in the Winter Palace and the Menshikov Palace of the State Hermitage. As part of the London A Cappella Festival 2010, Il Suono performed a programme of Italian madrigals at London's newest concert venue, King's Place, where the ensemble 'delivered some spirited Gabrieli' (The Independent) before a concert given by the illustrious Stile Antico. Other performances include a recital of madrigals and arias for the Society for Italian Studies in London, concerts of sacred polyphony in Lancaster Cathedral and many other churches in the UK. Highlights of these include solo-voice interpretations of Taverner's masterpiece Western Wind mass and Lassus's bizarre and captivating Prophetiae Sibyllarum.