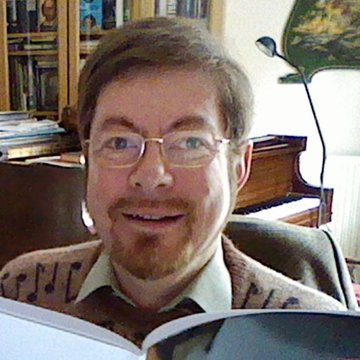 An active 'community keyboardist' since the mid-1970s, Ian also has considerable experience directing amateur choirs in Oxfordshire (to 2018, prior to relocation to Sussex): see range of indicative detail below. He has since been playing alternate weekends at the parish churches of Storrington and West Chiltington ~ when open! ~ plus occasional special events and concerts; is on the volunteer team providing seasonal background music around Christmastide in the Marble Hall at Petworth House (NT); and continues to give biennial recitals in New Zealand during visits to far-flung family there. Meanwhile for practice and development purposes (not to mention his own pleasure!) he has an Allen Q211-SP instrument on which, during the 2020 Covid lockdown, he began producing videos from a surprisingly wide repertoire ~ see samples of 'Ian's Interludes' channel elsewhere on this Profile, to show the breadth of his tastes, whose accompanying graphics and prog-notes offer a further sense of his background and cultural 'wavelength'. While he can coax music out of almost any organ or piano in playable condition, Ian also has his own versatile stage-piano rig, and a separate portable digital continuo unit (with harpsichord registers) for period oratorio work. His prior credentials include: MD of Oxford Welsh Male Voice Choir (2000-6), Albert Park Singers, Abingdon (2009-18), Abingdon Gospel Choir (2013-18) and All Saints', Sutton Courtenay (2008-18) where he also set up and ran series of 'Parish Prom' chamber concerts totalling 30 events over 7 years. Repetiteur to Abingdon Operatic [= stage-musical] society on 30 shows over 15yrs (1996-2011), Wantage Choral Society (2008-18) and Didcot Festival Chorus (2000-17); Associate Musical Director on the Abingdon Passion Plays 2013 & 2016. He has played in various cathedrals, and at the Sheldonian Theatre both for royalty (a ceremony for the visiting King of Jordan) and ~ separately ~ a sellout Welsh combined-choir gala. Conducting highlights have included two come-&-sing 'Messiahs' (one, shown above, at St Helen's, Abingdon), and choral music ~ including the premiere of his own through-arranged TTBB setting of 'Abide with Me' ~ in the presence of the then-Archbishop of Canterbury. He holds the Archbishops' Certificate of the Guild of Church Musicians and actively belongs to many other musical bodies e.g. the Hymn Society and his local Organists' Association, while also being a Friend and practical supporter of the (usually) annual English Music Festival based at Dorchester-on-Thames. He has meanwhile compiled and contributed over 100 specialist cryptic crosswords to the respected quarterly 'Organists' Review'. Previously employed as a graduate modern-language teacher at New College [Choir] School, Oxford (fd.1379) & elsewhere, Ian also offers language / phonetic coaching to vocalists alongside engagements as a versatile accompanist.

I can't thank you enough for your skilled and sensitive accompaniment on Sunday evening. I don't know if you realize what a difference you made - it was the first time that I have stood in front of an audience to sing a full solo in years, so it was a bit momentous. Having the cover and support of a truly gifted accompaniment made all the difference ... You covered me with grace and style, as well as a smile, and it was appreciated greatly! I am very fortunate that you landed in this time and place when you did.

Thank you for doing a great job on the day.

Ian Miles has left us after nearly a decade as accompanist. He was not only an accomplished pianist and tenor or bass as necessary, but always cheerfully fell in with the requirements of the Society.

Well done, again, on the EMF Singers - so lovely to have those songs ['Linden Lea'; 'The Long Day Closes', sung a-cappella a-4 at the Wake for a longstanding & indefatigable supporter of the English Music Festival]