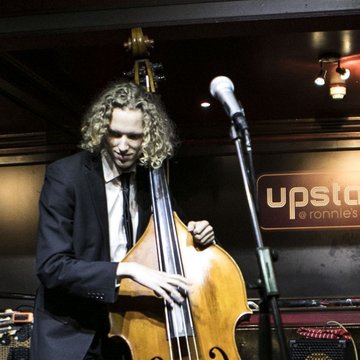 I started with cello at the age of 7, while also always playing the bass guitar on the side. I changed from cello to double bass at the age of 15. I played in numerous orchestras around Norway. From 2009-2011, I have been a member of a norwegian band called Mhoo, playing bass guitar and double bass. In 2010 we released a CD through Sony Music Norway/Colombia records, and received much nationwide attention and renown. We have played at many of the main Norwegian summer music festivals eg., Slottsfjellet, Vinjerock, Øyafestivalen, have toured Norway, co operated with other musicians, played support for Jeff Beck, Jethro Tull, Lizzie, appeared on TV, been broadcast on radio. As a bass player I have also played with Terje Rypdal, Ronny Le Tekrø, Paolo Vinaccia.

Håvard was polite and professional

I heard your absolutely incredible performance flowing across the garden and you guys were absolutely fantastic! Thank you for playing and making our wedding truly awesome and memorable,

They revisit and respect memorable milestones in the immense jazz tradition and are pioneers in their field.

Some lovely versatile and agile vocals… I think they have a very fresh take on gypsy swing.