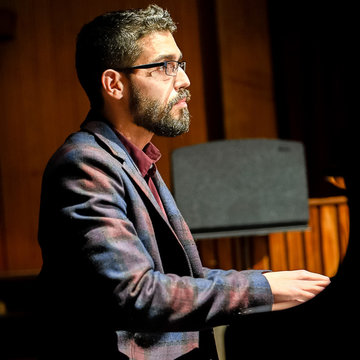 Horacio López Redondo is a London-based accompanist and chamber musician, and he performs extensively in the UK and Spain. Horacio (Talavera de la Reina, Spain, 1984) began his musical education, which eventually led him to join the Conservatories of Ciudad Real and Madrid, at the age of 5 years old. In 2007 he finished at the latter his degree in Piano Interpretation under the direction of Ms Ana Guijarro and his Vocal Accompaniment specialization under that of Mr Juan Antonio Álvarez Parejo. He then joined the Royal Academy of Music in London to follow his higher education, enrolling in the MA Piano Accompaniment program with teachers Mr Malcolm Martineau and Mr James Baillieu. He graduated in 2013 with Distinction. In 2013, Horacio was Highly Commended in the “Christian Carpentier Prize” to the Best Piano Accompaniment Exam at the Royal Academy of Music. In 2012 he won the Accompanist Competition as part of the Piano Festival “Canolfan Gerdd William Mathias” of Caernarfon, Wales. Also in 2012 he was awarded the Accompanist Second Prize at the “Ludmilla Andrew Russian Song Prize”, held at the Royal Academy of Music. He has accompanied several award winning singer colleagues in competitions held at the Royal Academy and the Wigmore Hall in London. Since his arrival in London in 2010, Horacio has performed as an accompanist at some of the most prestigious London venues, including St Martin in the Fields, Blackheath Halls, St. James' Piccadilly, King´s Head Theatre and Southwark Cathedral; but also in other parts of the country such as Canterbury Cathedral, Bristol Cathedral or “The Venue” at Leeds College of Music. Recent engagements saw him return to St James’ Piccadilly for the second “Spanish song & zarzuela festival “ with Mexican mezzosoprano Ligia López Cedillo.

Horacio was very helpful, professional and punctual during our process of rehearsing and recording together! I would be happy to work with him again.

Horacio stepped in as rehearsal pianist at the last minute to cover a soloists' rehearsal for Hashtag Opera's performance of Donizetti's Anna Bolena and was superb, musically and in the running of the rehearsal. We would be very happy to work with him again and to recommend him as a rehearsal pianist.

I couldn't make the gig but i communicated with Horacio prior to the event. I couldnt make the gig however, the young Mezzo singer who he accompanied told me he was very nice, professional and punctual.