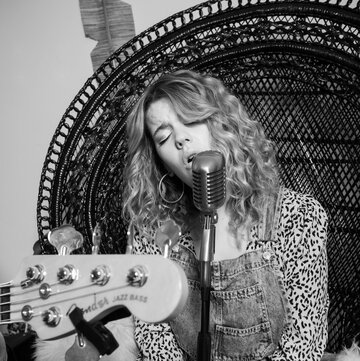 Hope is a 20-year-old singer-songwriter from London. Her wealth of life experience ensures her lyrics are raw and honest, resonating with people from the UK, to Malaysia, to Ukraine. This soulful intensity grants Hope the ability to make any cover she sings, feel as if you’re hearing it for the first time. Whilst her original songs allow for expression like no other. Every piano stroke oozes passion, with each lyric managing to remain authentic for whoever is listening to them. But don’t take our word for it, let her listeners do the talking. With over 20 million views and 100 thousand +subscribers, Hope’s growing audience is a community from all over the globe. All brought together by a young woman and her love of making music. The Road to Now. At 14, Hope played an Open Mic at a local Arts Fair. In the audience, a small independent studio called Jacket Records recognised Hope’s raw talent, it just needed some refining. So they began to work together, and after a year of releasing covers – her debut acoustic EP ‘Hope’ was released. After another year of lyric writing, cover releasing and piano playing – her second EP ‘Optimist’, which reached #8 in the Singer/Songwriter Charts. If you’ve only just discovered Hope’s music but her voice sounds familiar, it may not be your first time listening at all. In 2016, her beautiful rendition of Dusty Springfield’s classic “I Only Want To Be With You” was used by the Dog’s Trust in their nationwide #SpecialSomeone ad campaign. Not only that, but her cover of Bocelli & Brightman’s “Time To Say Goodbye”, reached 7 million views, and was used as the closing song in the finale of long-running Australian soap A Place to Call Home. Another year on saw her maturing her sound, releasing the single ‘Sanctuary’. This release signified the end of the opening chapter in Hope’s career, with her latest project being the most exciting and ambitious to date.

We worked with Hope for our event at the Gherkin in 2016. Hope's professional approach to the event was exceptional, especially for her age at the time. Not only did she perform in several locations within the venue (a challenge in itself) she took the time to learn, practice and perform tracks of our choosing not previously in her reportoire, to an amazing standard. Our attendees where stunned by her performance, every single one commented on just how good she was. It's also lovely to be able to look back as her covers of these tracks on her increasingly popular online YT channel. Hope is not only a talented musician but a wonderfully positive and pleasant person to have at any event. We wouldn't hesitate to work with her again in the future, and suggest you hire her while you can. This girl is going places.

Hope performed a set at my wedding on 17th August 2017. To say she was amazing was an understatement. To hear her singing live throughout the whole venue was truly amazing, we had so many complements on how talented she is and how it was so different to other performers at previous weddings that guests had been too. Throughout the whole process Hope was so professional ensuring we were really happy with all song choices etc. She arrived early to set up so it didn’t take away from performance time and ensured we were happy with everything before she left. It was honestly the most amazing performance and we are so lucky to have had Hope join us on our special day she really did play a huge part in making it amazing for us!