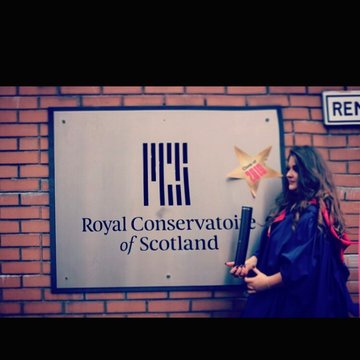 Hollie originally started learning Clarsach at the age of 12, under the instruction of Hannah Phillips. After a year and a half of playing, she was accepted into the Junior Department at RCS where she then progressed onto the pedal harp. Since beginning on pedal harp in 2013, Hollie has performed with the West of Scotland Schools Symphony Orchestra, European Youth Summer Music Symphony Orchestra, RCS Junior Conservatoire First Orchestra, Tayside Symphony Orchestra, Palestine Youth Orchestra and the Edinburgh Rehearsal Orchestra amongst others. Aside from orchestral playing, Hollie has also played for many weddings, private functions and drinks receptions throughout the UK; often arranging and performing requests as well as standard repertoire. Having graduated from the Royal Conservatoire of Scotland with a Bachelor of Music with Honors, Hollie is now continuing her studies with a Post Graduate Diploma of Education and often leads workshops as well as teaching.

Requests can be arranged to suit the occasion.
Customer questions

These things can happen, and I am usually very flexible as unforeseen circumstances happen to us all. Just let me know and we can discuss the best course of action ☺️

I aim to be there’s around 60-90 minutes before an event. I am very flexible and can be there earlier if required. I will always liase before an event so that you know exactly what to expect on the day!

Yes of course - there are no hidden fee’s and all transport costs are included. Please don’t hesitate to contact me for a breakdown of the fee!

Not at all - my instrument is acoustic so I am very self sufficient and can provide my own wireless PA where appropriate.

Yes of course! I love the challenge of arranging new music and personalising the experience for you (where appropriate). It’s always something we can discuss where appropriate - I am also more than happy to send recordings to make sure you enjoy the arrangements!

Yes of course - as with the set lists I am very flexible and can arrange most things so that they sound good. At the end of the day, I am hoping to provide a great experience for you and am more than happy to include you in the arrangement process so we can finalise something you are happy with.

Playing for the lovely Sarah and Marks wedding day