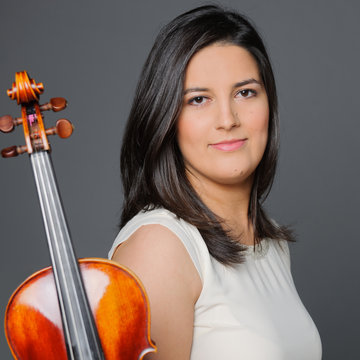 I am a Portuguese Professional Violinist with a broad performance experience.
Violinist
Shipley
Public liability insurance of £10 million
Verified profile

Portuguese Violinist, holds a Master and a Bachelor Degree in Performance with Honours from the Royal Academy of Music in London. There, she was a student of Igor Petrushevski, one of the leading violin teachers in the UK. She was also a student at the University of Arts in Bern with the international star soloist Benjamin Schmid, and at the International Menhuin Music Academy in Switzerland (2007-09). Born into a musical family, started to learn the violin at the age of 6. Heloísa has performed in Portugal, England, Holland, Switzerland, Monaco, Germany, Italy, USA, Spain, Austria and Brazil. More recently,in March 2015, she has performed a recital at the Felicja Blumental Music Centre in Tel-Aviv, Israel. In 2014 was a violinist at the Southbank Sinfonia Orchestra in London having performed at major venues such as the Royal Festival Hall, Royal Opera House, Cadogan Hall, Saint Martin-in-the-Fields, St John's Smith Square and at the Notre-Dame Cathedral in Paris. She has worked extensively as first violin with Porto Symphony Orchestra Casa da Música, one of the top orchestras in Portugal (2007-2013). At the age of 17 was Assistant Concertmaster of the Aspen Concert Orchestra in Colorado, USA. Was a winner in several competitions in Portugal, such as 1st Prize at the Julio Cardona International String Competition, 1st prize at the Juventude Musical Portuguesa and 2nd Prize at the RDP Prémio Jovens Músicos. At the early age of 12, Heloísa represented Portugal and was a laureate at the Piccoli Mozart event in Montecarlo, broadcasted internationally on television. She was awarded a Santander Universities Award (2013) and holded a scholarship from the Calouste Gulbenkian Foundation during her studies in England.

Heloísa is an extraordinary highly talented violinist, who fulfills not only the highest technical demands, but also possesses musical integrity in her interpretative expression.