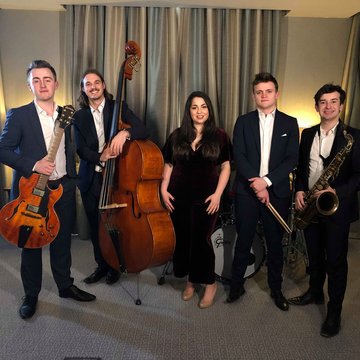 Helena Debono's Jazz Soul Band is an in demand sophisticated Jazz band based in London.

Helena Debono’s Jazz/Soul band is an in demand band based in London, UK. The band is made up of some of the best musicians in the UK who have played at various prestigious venues including, Ronnie Scotts Jazz Club, The Royal Albert Hall and many more. All members of the band have studied Jazz Music at conservatoire level and have a multitude of live performance experience under their belts, including performances with the National Youth Jazz Orchestra and many more. Helena’s music has been played on National Radio stations including The BBC and Soho Radio. With experience playing at corporate events, weddings and casual receptions in the UK and beyond, Helena and her band are sure to make any event extra special!

Jazz/Swing/Latin:
Cheek To Cheek
It Could Happen To You
Love For Sale
Blue Skies
My Heart Stood Still
Beautiful Love
All Of Me
The Girl From Ipanema
On The Street Where You Live
Bye Bye Blackbird
Cry Me A River
Feeling Good
The Lady Is A Tramp
Its Only A Papermoon
Fever
L-O-V-E
I Wont Dance
Route 66
It Don't Mean A Thing
How Insensitive
That Old Black Magic
Polkadots and Moonbeams
There Is No Greater Love
Every Time We Say Goodbye
Let’s Fall In Love
A Fine Romance
Mac The Knife
Misty
I Get A Kick Out Of You
But Not For Me
Night And Day
They Can’t Take That Away From Me
Blue Moon
Bewitched
Our Love Is Here To Stay
I Only Have Eyes For You
How High The Moon
Tea For Two
It Might As Well Be Spring
You Make Me Feel So Young
etc...
Pop/Soul
Just The Two Of Us
Crazy
Isnt She Lovely
Ain’t Nobody Superstition
Put ya records on
American Boy
Natural Woman
Painter Song
Ain’t No Sunshine
Don’t Know Why
Fever
Save Your Love For Me
Mercy
etc...
Customer questions

The singer will always be the same as who you see on the video!

We have different line up options ranging from a guitar/vocal duo to the full 5 piece band (as seen on the videos).

We always try our best to be as flexible to help ensure your event runs smoothly as possible. If timings change slightly in the run up to the event just let us know.

Absolutely. We can provide an iPod service before and between the sets.

Ofcourse! We are happy to chat about any song requests you may have and tailor the set list to make it as personable to your event.

Our PA is included in the quote.

Clients love the professional, slick nature of our performances.

We have collectively played at some of the most prestigious venues in the UK. Including, The Royal Albert Hall, Ronnie Scotts, etc.

Helena and her guitarist, Nick, were absolutely fantastic to play at our wedding after dinner drinks. They set a sophisticated yet relaxed mood and were universally praised by us and our guests. They couldn't have been more professional. If you get the chance, don't hesitate to book them. Nick & Matthew

CB
Courtney B
4 years ago, for a Birthday party in London W4

From initial booking to the end of their performance this band were professional and friendly, and we knew they had everything under control! Everyone was so impressed by the band, and the singers voice was amazing! They played two 45 minute sets, one during the dinner to create atmosphere and then the second to get everyone up dancing! The singers ability to read the atmosphere and to choose songs accordly meant I felt at ease throughout the night with such a professional singer

LH
Libby H
4 years ago, for a Private event in London

Helena and her band are extremely talented. They’re a great addition to any event. Helena has an amazing voice and great stage presence.