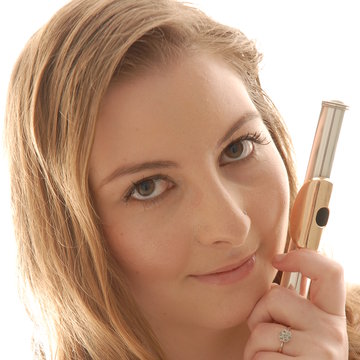 Check availability and get a free quote now - no commitment to book
From£180
About Helen
Home page
Helen Manente
Like Helen?

Helen Manente graduated from the Royal College of Music in 2005, having completed her MMus, PgDip and BMus (Hons) under the tuition of Graham Mayger, flute and Stewart McIlwham, piccolo. She has since gained a wide experience as a freelance musician, taking pleasure in performing as a soloist, chamber musician and freelance orchestral player, as well as a keen flute tutor, most notably at the Benenden School in Kent. In her career as a professional flautist, Helen has performed in many prestigious venues such as St. Martin-in-the-Fields Chuch, St. James’ Chuch, Piccadilly, and St. John’s, Smith Square, as well as The National Gallery and Conway Hall in London, and St. David’s Hall, Cardiff. Helen very much enjoys participating in education work, having worked extensively with The Philharmonia Orchestra’s Elastic Band project, as well as collaborating with many orchestras and ensembles in the South East. Helen is the recipient of an award from the Munster Musical Trust.