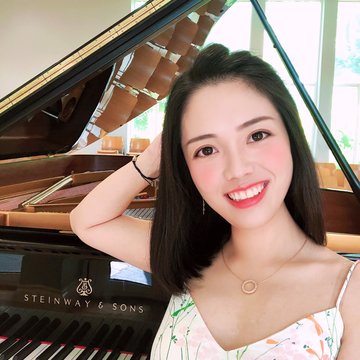 Hazel Nguyen began her music education at the age of three and was admitted to Vietnam National Academy of Music by the age of six. Developing a controlled, prodigious technique, she has been praised for her authority over the most complex technically demanding pieces, the depth of her musical insight and charismatic stage presence. With a full scholarship to study at the Royal Conservatoire of Scotland. She graduated with a First-Class Degree. Phillip Kubilius, Heather Slade-Lipkin and Martin Roscoe played an important role in guiding and supporting Hazel during her years in the UK. Recently, Hazel was awarded Worthing Pianist of The Year. At Brighton Springboard Music Festival, she won the Senior Championship, as well as the Senior Concerto Class. As a result, she will be performing with Brighton Youth Orchestra in the next seasons. Hazel will also represent Brighton for the national award competition later this year. Her virtuosic recording of Beethoven’s Bagatelle op.33 no.5 was played on BBC Radio 3 and made signature for their program In Tune. In Glasgow, producing the best performance of a Mozart Concerto, she was awarded Jock Holden Memorial Trophy. Hazel won the Rosanne Archibald prize for the most promising musician at Blackburn Music Festival, and was also a winner at Glasgow Rising Star competition. As of 2018, Hazel is teaching piano at Rossall School in Lancashire and Sedbergh School in Cumbria.

Hazel was absolutely wonderful, she nailed all our requests for our wedding ceremony and played beautifully throughout our drinks reception. I would 100% recommend her to anyone who needs a pianist for their wedding or other event! Thank you Hazel for helping to make our day so special!

RS
Rossall S
3 years ago, for a Concert in Broadway

An indulging and artistic concert!

SC
Steinway H
3 years ago, for a Theatre / Show in Hanoi

Hazel is a wonderful and knowledgable pianist. Cant wait to have her again next summer