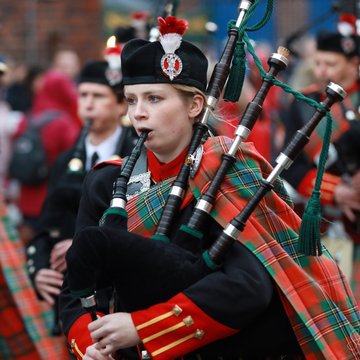 Piper available for your special event in London, Kent, and the South.
3 of 12 photos
Bagpiper
London
Verified profile

Harriet McCall Davies is a piper and cellist based in London and a graduate of the Royal Academy of Music where she was the recipient of the Sir John Barbirolli and Peter Halling Memorial Prizes during her studies. She now juggles a busy freelance career performing, teaching, writing, and broadcasting. When it comes to piping Hattie is a versatile musician experienced both in the worlds of the marching pipe band and as a solo piper. She regularly plays, and parades with the Rose and Thistle Pipe band and has toured Europe with them most recently to Ypres and Cologne. As a cellist under the tuition of Felix Schmidt, whilst at the RAM Harriet received masterclasses from Sung-Won Yang, Colin Carr and Mario Brunello and performed regularly with the Royal Academy Symphony Orchestra and Concert Orchestra under the batons of some of the world’s leading conductors including Sir Mark Elder, Sir Colin Davis, Edward Gardner, Semyon Bychkov, Jac van Steen, and Thierry Fischer. Actively involved in music education Hattie is a recipient of The Diana Award and was nominated for a Times Educational Supplement Award.

I always try my best to be flexible to help ensure your event runs as smoothly as possible. If timings change slightly in the run up to the event just let me know and we can discuss what is possible.

Unfortunately not as this is not normally appropriate for the kinds of events that I usually play at as a bagpiper!

I prefer to arrive about an hour before the performance time - this is to allow time to change into full dress uniform as well as to tune my pipes. It is worth noting that tuning the pipes is noisy and may ruin any sense of surprise dependent on your venue - if this is an issue I am more than happy to discuss solutions to this beforehand!

I am experienced in picking appropriate tunes for the events in question and tailoring set lists to timings and situations however I am always happy to discuss the music with you and to take specific requests!

Yes absolutely! I bring my own pipes (no amplification required trust me!) as well as full dress uniform if it is requested.

If a tune isn't included in my set list there may still be a chance I already know it so always ask!. If there is a specific tune you'd like me to learn I am usually happy to do this for you. There is a fee of £30 for this service to take into account rehearsal time.

The special sound (and volume!) of the pipes and the unique splendour that piping brings to your event.

I have performed in hotels, restaurants, churches, crematoriums, and private venues as well as outside at festivals, military events and remembrance parades.

All of them! It doesn't matter the profile of the event - every gig, ceremony, event, or performance is just as important to the people involved and special as the next. That being said I have performed in front of royalty, at the Cannes Film Festival, and in the Cologne Carnival Rose Monday Parade...so I'm well used to dealingwhatever you might throw at me!

Standard Prices
All prices include:Your choice of No.1 or No.2 dress uniform and any tune requests of your choice from my set list.

We hired Hattie to play our Burns Night dinner and she was fantastic. She created several set lists to fit in with the schedule for the evening, and was very helpful and accommodating throughout the whole planning process. I would highly recommend Hattie to anyone looking for a piper for any event.

WR
Will R
2 years ago, for a Burns night in Sevenoaks

"The band, the Piper and of course the address were all amazing!! I have also recommended you to our deputy head of senior school who will be holding a personal event here and would like to book you."