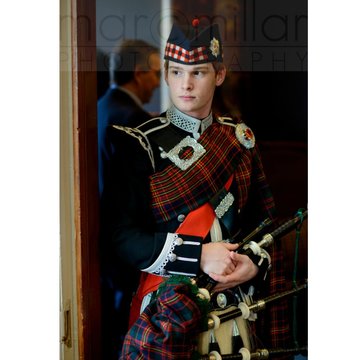 A Bagpiper with over 10 years of experience offering a tailored service for your event.
3 of 21 photos
Bagpiper
Earlston
Verified profile

A born and bred Scot, I started playing the bagpipes from the age of 12 after becoming captivated by their bold and unique sound after watching my school's band practicing one day. Since then, I have had the honor of being taught by some of the most renowned pipers in world at one point or another, all of whom have won some of the most prestigious awards in the piping world, including The World Championships: Barry Donaldson, Gordon Campbell and the famous father and son Duo: Tom and Iain Speirs. To this day, I have performed at countless weddings, Burn's nights, remembrance days, funerals, corporate and social events all over the UK and further afield including France, Switzerland, Italy and South Africa. As well as this, I am a regular on the competition circuit for both band and solo competitions and have picked up many prizes along the way. Some of my particular highlights have been playing in the Beating of the retreat at both Edinburgh Castle and Holyrood Palace, piping at Murrayfield Rugby Stadium as the Scotland rugby team run onto the pitch and being the solo piper at the St Gallen International tattoo (Switzerland). Currently, I perform with two bands: the first is the Piper's Trail- the Royal Edinburgh Military Tattoo house band, and the second is the Grade 2 Grampian police Scotland pipe Band. Both of these bands have players of the highest ability and are fortunate enough to be invited to perform all over the world, as well as at competitions and events throughout the United Kingdom! I am able to offer each of my clients a tailored service to meet all of your requirements to make your event extra special by having a traditional Scottish piper. I am able to play in either full Traditional No. 1 dress in Modern Cameron of Erracht tartan, or the Piper's Trail tartan, or the more informal No 2. Dress in Modern Cameron of Erracht tartan, Black Watch Tartan, or the exclusive Piper's Trail tartan: the choice is entirely up to you, or for something slightly less formal or more fun, I can also offer a third dress option: any of my kilts and a rugby shirt!

Harvey was great piper arrived on time and really looked the part with full Highland dress piping in our guests. So good we want to book him for next year for Burns night! Fantastic thanks Harvey

Harvey, Thank you so much for piping for us on our special day! You played brilliantly and we cannot wait to watch our wedding video and relive those moments again!

Dear Harvey, Just a wee note to say thank you very much for doing such an excellent job playing at our wedding! We had so many comments about how good you looked & how well you played. One of my favourite parts of the wedding was being piped down the aisle!

A massive thank-you to Harvey from all the staff at the Bluewater Loch Fyne Seafood & Grill for helping us with our Burn's night, you looked and played fantastically!

I booked Harvey as a surprise for my husband on our wedding day to pipe us out of the church and could not have asked for a more special moment when my husband realised what was happening. You helped make that day one that we will never forget!

Hi Harvey, Just wanted to say a big thank you for piping at our wedding on 30 July. It made our ceremony extra special and we will never forget. Our English guests loved that little Scottish touch too!

Hi Harvey, Many thanks for playing at our wedding the other day, all over our guests were highly complementary of you and we loved the special touch you put in for us! All the best.

Just watching our wedding video. Thanks for doing such a great job!