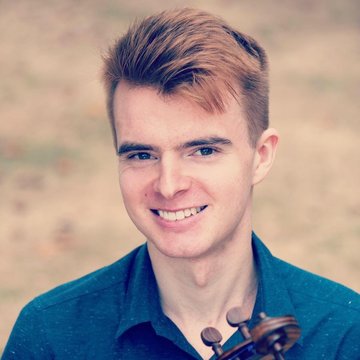 Check availability and get a free quote now - no commitment to book
From£180
About Harry
Home page
Harry O'Keefe
Like Harry?

Harry O’Keefe is a young diverse violinist who has performed in some of the most prestigious venues in the UK and Europe including: Royal Festival Hall, Birmingham Symphony Hall, Barbican Centre, The Roundhouse, Leeds Town Hall, Royal Albert Hall (as part of BBC Proms) and many others. His teachers have included Clare Thompson, Ben Wragg, Boris Brovtsyn and Mayumi Fujikawa Harry won the intermediate and senior divisions of the John McAslan violin competition at Junior Royal Academy and was the winner of the Ealing Festival violin concerto competition 2010. In 2016 he won 2nd prize and the Brumsgrave Cup at the John Lill Awards. In 2017 he was a semi-finalist in the Trinity Laban Soloist Competition. He has participated in masterclasses with several violinists including Kenneth Sillito, Vasko Vassilev, Mi-Kyung Lee, So-Ock Kim and Yossi Zivoni. As an orchestral musician he has played in various professional orchestras including the Halle, Bournemouth Symphony and many others, as well as being a previous member of National Youth Orchestra of Great Britain, playing under the baton of esteemed conductors such as Vasily Petrenko, Semyon Bychkov, Paul Daniel, Ewa Strusinska and many others.