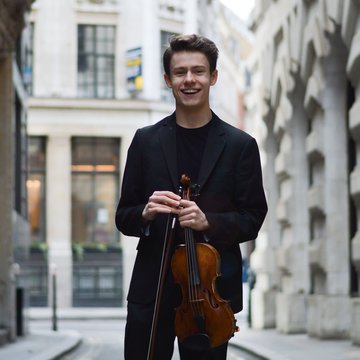 I am a versatile violinist who is ready to help you with any of your musical needs!
Violinist
Beverley

Harry started to play the violin when he was 3 years old with Barbara Parham in Beverley, East Yorkshire with whom he studied for 13 years. During this time, he was accepted into the National Children’s Orchestra, where he received a Leverhulme Scholarship and the opportunity to lead the orchestra at venues such as Colston Hall, The Lighthouse, Poole, and the Royal Festival Hall. He was the winner of the East Coast Young Musician of the Year in 2016, and subsequently was invited to perform ‘Hejre Kati’ with the Hull Philharmonic conducted by Andrew Penny. As a soloist, Harry has performed at Classics in the Park in Hull, Queens College, Cambridge and in many other recitals in his local area. When Harry was 13, he was given a place in the National Youth Orchestra as the youngest member in 2015, performing at the BBC Proms, Birmingham Symphony Hall and the Young Euro Classic at the Berlin Konzerthaus. Subsequently, Harry completed 5 successive years in the NYO, as well as being Co-Principal Second in 2018, working with conductors such as John Wilson, Marin Alsop and Edward Gardner. During his last two years at school, Harry attended the Junior Academy, studying with Clare Thompson. Since he joined, he led the symphony orchestra, won the chamber music prize in 2018 and participated in the Gary Levinson masterclass. Through the Junior Academy, Harry has featured as soloist with Sounds Baroque at Coram’s Handel Birthday Concert (performing Vivaldi’s ‘La tempesta di mare’ concerto) and solo violinist in Junior Academy’s production of Stravinsky’s ‘Soldier’s Tale’ collaborating with dancers and actors from Rambert and RADA. Currently, Harry studies with Professor Rodney Friend at the Royal Academy of Music as a scholar. As a second year, he has taken part in Symphony Orchestra projects conducted by John Wilson and a Chamber Orchestra project conducted by Trevor Pinnock. Additionally, Harry is leader of the Campanella Orchestra, a recently established student-led ensemble conducted by Sam Scheer, which had its first concert in February 2020 performing works by Shostakovich and Tchaikovsky. In July 2020, Harry participated in the Friend’s International Violin Academy and was fortunate to receive tuition from professors including Joel Smirnoff, Yuzuko Horigome and Dong Suk-Kang. Furthermore, in July 2021, Harry will lead the Amadeus Orchestra which is one of foremost training orchestras for young professionals and music students in the UK, performing in a concert at Exeter Cathedral. Harry plays an English violin by John K. Empsall and Hill bow both lent to him by the Royal Academy of Music.

Great string playng technique is all about a lovely sound and he has that in spades! One to watch.