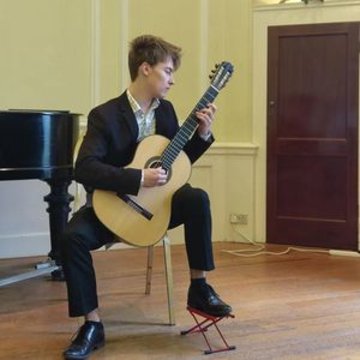 Harold Gordon-Smith was born in 1994 to a family that had virtually no interest or involvement in music. So it was much to their surprise, when the young boy began teaching himself the demo pieces on the unused and mainly decorative keyboard he had in the house. By the time he was 14 he began teaching himself the guitar and learnt a broad range of styles from flamenco to jazz. At the age of 18 Harold decided he wanted to seriously study classical guitar and learnt his first full classical guitar pieces, which he used for his conservatoire auditions. One year later he was offered places at RCM, Guildhall, Royal Northan and Trinity Laban. Harold chose to study at Trinity and began to study under his first guitar teacher, Graham Devine. Now in his final year, he has recently accepted an unconditional offer to study a Masters in classical guitar performance at TrinityLaban for Sep 2018. After winning a local talent competition, Harold was interviewed by guardian newspaper. Later, Early Music Direct released films of Harold playing their high-end Baroque and Romantic guitars as a demonstration for clients. He is now involved in many chamber ensembles including a guitar orchestra, and various duos. throughout these most resent years Harold has developed a reputation for his interpretations of J.S Bach and has now been offered to record his first album with Sheva records (a Naxos partner). Harold taught himself gymnastics to a standard where he won a gold medal and also parkour to a level where he was appearing as a stunt-double in music videos for Fowls and Tempertrap. Through these experiences of self pedagog, Harold has developed a unique teaching philosophy which is used in his method for guitar teaching and self development.

Classical ensembles in the UK