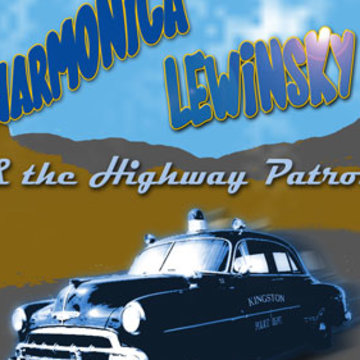 About Harmonica Lewinsky & The Highway Patrol

Great country and western swing band based in London

Country, western swing, jump jive, rock n roll. The band is led by Harmonica Lewinsky, guitar, harmonica and vocals, performs solo and was with O Brother Where's Hank, Otis Lifts and other bands over the last 20 years; Dzal Martin on lead guitar and backing vocals, member of the Equals ('Baby Come Back') for 30 years, also No Dice, Terry Reed, The Trembling Wilburys, the Joe Burt Experience and many more; John Davis, pedal-steel guitar, played with George Hamilton IV and V, The Alabama Hayriders, Dave Dudley, Stonewall Jackson, Bobby Bare and many more, Ewan Penkey on double bass and backing vocals, plays with The Rhythmn Aces, the Vanguards, the Rigmarollers, the Boot Heel Playboys, the Dustbowl Sinners among others. As you can see, we are seasoned musicians with huge experience. Great cool, wry stage presence, awesome musicianship, fabulouse rocking honky-tonk band

Last night I met up with some pals down at the very hospitable Mermaid Inn to check out the latest musical venture of the great Harmonica Lewinsky. We’ve always been highly entertained by his music hall/cockney act and indeed his harmony pop/rock band, the Philistans, but this was to be something of a completely different flavour – a country/ western swing experience! Launching into ‘Glendale Train’, Lewinsky and his band, The Highway Patrol, soon had the place rocking. The sound of finger pickin’ Dzal Martin’s Telecaster was the perfect accompaniment and upright bass player Ewan Penkey’s rhythm proved that no drummer was required. As well as rockers such as ‘Panama Red’, ‘Folsom Prison Blues’ and the brilliant tongue-twisting ‘Hot Rod Lincoln’, Lewinsky and the boys were also able to deliver truly 'hurtin' & heartbreaking' melancholy classics such as Warren Zevon’s ‘Carmelita’ and Kenny Rogers’ ‘Ruby’. Their touching version of Commander Cody’s ‘Seeds & Stems Blues’, featuring the wonderful pedal-steel guitar playing of John Davis, (who had been impeccable all evening) had me almost crying into my pretzels. Personality and humour has always been an important part of Harmonica Lewinsky’s act and, with his usual banter and rapport, he certainly didn’t let us down. We particularly enjoyed the tongue-in cheek ‘All My Exes Live in Texas’. Thanks for a great night, boys – we look forward to the next time.