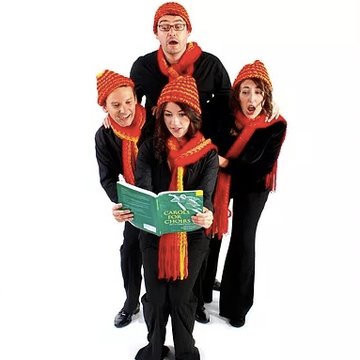 About Hark the Herald

Basically, it's pretty simple; we sing carols. We don't do that Singing Waiters thing, we've never been on X-Factor and we certainly don't rap. We sing carols and we sing them well. So, if you're organising an office party, private bash or festive knees up in November or December (we kindly suggest you don't book us to sing in June as we get terribly hot in our hats and scarves!) and would like some jolly carollers, then get in touch! Hark The Herald! is a group of young professional singers who perform Christmas carols at events, large and small, around the country. Here's a list of a few of the places we've been spotted singing: The Tower of London, Kensington Palace, Tiffany, Harrods, The Reform Club, The Dorcester, Claridge's, Mansion House and The Banqueting Hall. We've been heard on numerous radio adverts and have even appeared on a 'Glee' podcast. Please forgive all the shameless name dropping!

As with Gladness Men of Old
Away in a Manger
Carol of the Bells
Coventry Carol
Ding Dong Merrily on High
The First Nowell
Frosty the snowman
Good King Wenceslas
God Rest You Merry, Gentlemen
Hark! The Herald Angels Sing
The Holly and the Ivy
I Saw Three Ships (Come Sailing In)
It Came Upon the Midnight Clear
Jingle Bells
Jingle Bell Rock
Joy to the World
Let it snow
O Come, All Ye Faithful
O Little Town of Bethlehem
Past Three O'Clock
Rudolf the Red Nosed Reindeer
Silent Night
We Three Kings of Orient Are
While Shepherds Watched Their Flocks
White Christmas
Customer questions

We are primarily a quartet but can easily augment to six or singers.

We always try our best to be flexible to help ensure your event runs as smoothly as possible. If timings change slightly in the run up to the event just let us know. Significant changes will need to be agreed beforehand however, as we will more often than not be coming from, or going to another gig afterwards.

We usually only need to arrive 15-20 minutes before a gig, as we have no setting up to do. We don't use amplification unless you want to provide it.

They are absolutely AMAZING! What a pleasant surprise! I love them!!!

Great performance and a pleasure to work with!

I've just got home from Wembley and just wanted to say that the choir and workshop leader were great! The Reading staff were also really good.

Dear James, Please pass on a massive thank you to your wonderful singers. They were spectacular! Honestly, they made the whole occasion a real celebration and the Ave Maria was simply divine. Your soprano is literally incredible! A million thank yous, I am sure we will have occasion to use you for future events and will certainly recommend you. Kindest Sophie Well done everyone!

I saw IKEA Reading choir and they were brilliant! Please pass on how good they were. They really got into the act, pretending to clear up in restaurant and then started singing. Their voices were incredible!

Thank you so much, it was just what we wanted. We loved the Christmas jumpers too!!! See you next year :)

Dear James, you and your team really added to our event. Thanks for making the extra effort with our guests. We had lots of our regulars giving us feedback about how much they enjoyed the afternoon. Have a good Christmas when it comes!