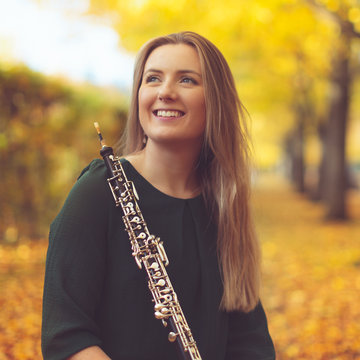 Oboe/Cor Anglais player based in London, graduate of the Royal Academy of Music
Oboist
London

Hannah is completing her Masters degree at the Royal Academy of Music studying with Christopher Cowie, Ian Hardwick and Sue Böhling, having recently graduated from the Academy with a first class Bmus Honours in 2019. Hannah has enjoyed playing principal oboe numerous times with the RAM Symphony Orchestra and Chamber Orchestra under namely John Wilson, Robert Trevino and Lorenza Borrani. Hannah was pleased to be chosen to play principal oboe for the Rite of Spring BBC Prom in 2019 with Ed Gardener. She also plays principal oboe with the London Mahler Orchestra, and led the oboe section of the National Youth Orchestra of Great Britain in 2015, performances culminating at the BBC Proms and Berlin Konzerthaus with Sir Mark Elder. Her professional orchestral highlights include playing with Sinfonia Cymru and with the Philharmonia, who she will be playing 2nd oboe with in April. Hannah has also enjoyed performing with the London Sinfonietta and Manson Ensemble at the Royal Festival Hall in 2017. In partnership with the Czech Philharmonic and the Academy, Hannah led a performance of Dvorak’s Wind Serenade. She is the founding oboist of the Daphnis Wind Quintet, awarded the Nicholas Blake Woodwind Ensemble Prize in 2018, semi-finalists in the Royal Overseas League competition 2018, and performing twice at the Wigmore Hall. Hannah is a chamber music fellow at the Academy for 2019/20. Her solo performances include playing Vivaldi’s Oboe Concerto in C Major in 2017 with the Brio Chamber Orchestra and Strauss’ Oboe Concerto in 2015. Hannah was delighted to also play Elliott Carter’s ‘Inner Song for Solo Oboe’ at Wigmore Hall, opening a Nash Ensemble recital. She has also played in masterclasses with Jonathan Kelly, Kai Frömbgen, Olivier Stankiewicz and Juliana Koch, and was highly commended in the Barry Grimaldi Cor Anglais Prize in 2016. Hannah won the Munster Trust Neil Black Prize in 2019, and was the Polonsky Foundation Fellowship recipient at Aspen Music Festival in summer 2019. She is a recipient of a scholarship at the Royal Academy of Music, and was previously the recipient of the Nicholas Blake Memorial Scholarship during her undergraduate degree.

Of particular beauty was Hannah Condliffe’s oboe solo, set against a totally unanimous body of strings.

The oboist (Hannah Condliffe, 17) in the Bach, stood out in a crowd bustling with talent.