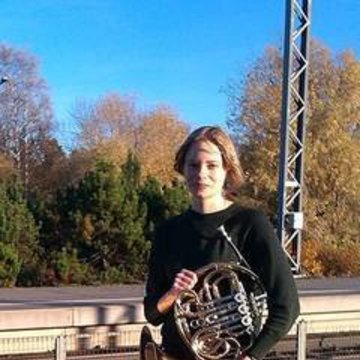 Check availability and get a free quote now - no commitment to book
From£180
Watch & Listen
About Hanna
Reviews
Home page
Hanna Peters
Like Hanna?
Watch & Listen
1 of 1 video
Weber, 4 Hannas

Hanna is an experienced French horn player and teacher based in London. She spentfour years in Manchester completing her undergraduate degree at the Royal Northern College of Music, as well as taking part in an Erasmus exchange in her 3rd year when she studied at the Sibelius Academy in Helsinki. She then studied at the Royal College of Music for one year and having now left is learning with Timothy Jones, Nigel Black andJonathan Lipton. Her past teachers have included Lindsey Stoker, Julian Plummer, Timothy Jackson, Froydis Ree Werkre, Erja Joukamo Ampuja and Lizzie Davis. Whilst at the RNCM Hanna performed regularly with the various RNCM ensembles - Symphony Orchestra, Chamber Orchestra, Concert Orchestra, Wind Ensembleand Brass Ensemble. She also regularly performed with the ensembles of the Manchester University Music Society. Recent activities include the Mediterranean Opera Festival (Sicily, June-August 2016), the Aurora Festival and Masterclass (Sweden, November 2016) and involvement with the Street Orchestra of London.

We conversed mainly via phone, she was punctual but shame I didn't get to meet her properly after the event. Was a pleasure to have her step in at short notice :)

Great! It was a pleasure to have Hanna play with our orchestra.

Hanna played for Hashtag Opera's concert performance of Donizetti's Anna Bolena and did an excellent job. We would be very happy to work with her again and to recommend her.

French horns in the UK