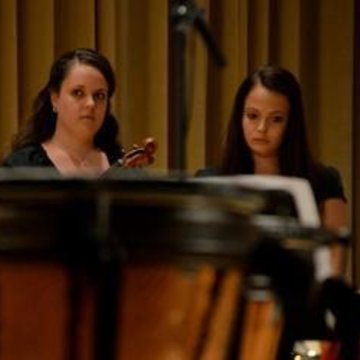 Corinna and Simone Hentschel were both born in Neuss, Germany where they attended and received their Abitur from the Marienberg archiepiscopal school. Corinna began learning violin at the age of six, starting as a pupil at the music school of Rhein-Kreis Neuss in Grevenbroich and later taking lessons with various private teachers. Since 2009, she has been attending the Conservatory of Music in Rostock, where she studied with Liviu Casleanu until 2012. Since octobre 2012 she studies in the class of Holger Wangerin. 2014 she began to study MMus with Ofer Falk at Trinity Laban Conservatoire of Music and Dance, London. Simone discovered her passion for percussion quite early on and began at the age of five with percussion lessons, also at the music school of Rhein-Kreis Neuss. She studied with Adel Shalaby and is currently a student of Arnold Riedhammer at the Conservatory of Music in Munich. Both sisters have appeared onstage with various ensembles, most recently together with the Piazzolla-Quartet-Marienberg. The duo gave their debut as the HENTSCHEL-Sisters in February 2008 in Sandbauernhof Liedberg, presenting a program consisting of unusual duo selections, as well as solo works on their individual instruments. In this year's concerts, the program was exclusively focused on the duo ensemble and therefore, entirely unknown and virtuostically thrilling new works were brought before the audience. With the combinations of violin - marimba, violin - vibraphone, and violin - setup, the sisters were able to create and bring to the stage an unconventional program full of variety and colors. Parts of the programming were assisted by Peter Sadlo. Despite the current long distance in the sisters' living situation, Corinna and Simone always find the time to rehearse and perform together, and to explore and expand their duo repertoire.