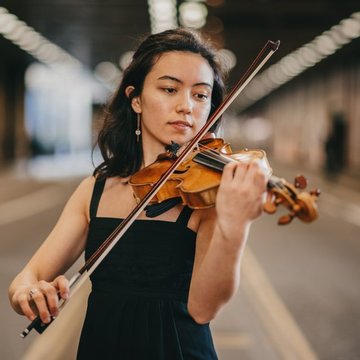 Gwyneth Nelmes is currently a Master's student at the Guildhall School of Music and Drama taking lessons from Professor Krzysztof Smietana. Although she was born in England in 1998, she spent the majority of her life growing up in New Zealand where her love for the arts first budded. It quickly became obvious that music was her true passion and she has since moved back to England to pursue a musical education and career in London. In New Zealand Gwyneth led and played in many orchestras, received Chamber competition awards and performed several solo pieces with Orchestra. Such pieces include the Bruch Violin Concerto and Telemann's Violin Concerto in E major. Since coming to England and refining her skills, she has spread her experience to touring in France, Switzerland and Germany as part of a String Orchestra, touring Hong Kong with her quartet and giving duet concerts in France, Israel and England. One of her most notable solo performances was in July of 2017 when Gwyneth performed the Prokofiev Violin Concerto no. 2 with conductor Paul Daniel. She recently gave a recital at the Guildhall School of Music and Drama (where she graduated with BMus Hons, classification first class, in 2021) and performed the Bartók Solo Sonata for Violin, Beethoven Violin Sonata no 1 and Silvestrov's Two Pieces for Violin and Piano. She has been lucky to have worked with many professionals including Augustin Hadelich, Krysia Osostowicz, Igor Petrushevski, So-Ock Kim, Michael Vaiman, Petru Munteanu, Hong Wang and Herwig Zack in masterclasses, and also has her previous teachers Karin Leishman, Simon Smith and Dimitri Atanassov to thank for their help and inspiration.

Gwyneth is a talent to watch out for