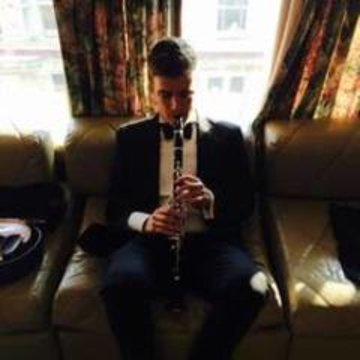 Check availability and get a free quote now - no commitment to book
From£180
Watch & Listen
About Greg
Reviews
Home page
Greg Hearle
Like Greg?
Watch & Listen
1 of 1 video
Poulenc- Sonata for Clarinet and Piano, I: Allegro Tristamente

Currently based in Brighton, Greg works as a orchestral freelancer in London and South Wales. Member of Southbank Sinfonia 2018.
Clarinettist
Brighton
Public liability insurance of £10 million

Greg has recently graduated with a First Class BMus (Hons) from the Royal Welsh College of Music and Drama, studying with Timothy Lines and Robert Plane (BBC National Orchestra of Wales). Greg is continuing his studies as a Masters student at the Royal College of Music with Timothy Lines, Barnaby Robson and Michael Collins. He is an RCM Scholar, supported by the Wilkins-Mackerras Award, as well as the Countess of Munster Musical Trust Derek Butler Award, the Walker Trust, the Rosalie Inskip Musical Trust and the Denne Gilkes Memorial Fund. Originally from Shropshire, Greg had Clarinet lessons with the Shropshire Music Service from the age of 10. During this time he won both the 2009 Philip Cunningham Award for Most Promising Young Woodwind Player in South Shropshire and the 2010 Shropshire Young Musician of the Year. Subsequently, as a soloist, Greg played the Mozart Clarinet Concerto and William Mathias' Clarinet Concerto with Shropshire orchestras. Today, Greg performs with a large variety of ensembles across the UK, ranging from chamber works with his wind ensemble New British Winds to freelance musical theatre and orchestral work. In his final year of study in Cardiff, he benefitted from a professional placement scheme with the orchestra of the Welsh National Opera and now holds the position of Sub-Principal Clarinet at the Welsh Sinfonia. An enthusiast for contemporary music, Greg has premiered dozens of works with Sinfonia Newydd and took part in London Sinfonietta Academy 2014.

From the very start of the concert their skill, enthusiasm and enjoyment was communicated to the audience who soon realised they were in for a musical feast.