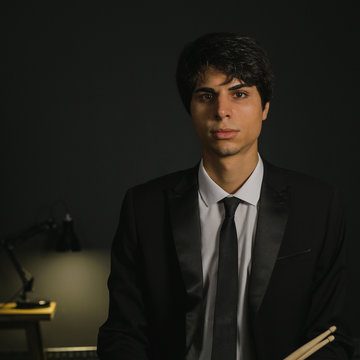 Session drummer with dedication and ability to work independently and collaboratively. Hardworking, versatile and committed.
3 of 5 photos
Drummer
London

Hi, My name is Giulio Bardi, I'm an Italian session drummer. I study music since the age of 9; I started with guitar and drums, also playing percussions in a classical youth orchestra called "OfficinaMusiké" as well as singing for three years in a classical school choir. I played drums and percussions in the musical “Little Shop of Horrors” on stage at “Teatro Nuovo,” a theatre in Turin. With a percussion ensemble, I participated in and won the 2011 annual edition of "Turin Live Festival," a cultural, artistic event for young and promising artists, in the percussionists' section. In 2014 I played drums in the orchestra that performed the song "Bella Ciao" in memory of the fascist massacre of 18 December 1922, in “Piazza XVIII Dicembre” in Turin. I was involved with different projects and gigged quite frequently in Turin. I've performed regular freelance work in London in differente venues, such as: The North London Tavern, Nightclub Kolis, Mandarin Oriental Hotel, Nambucca, The Spice Of Life, Numbersixbar, St James Church (with Sofar London), The Monarch, The New Cross Inn and others. I Have graduated with First class from ICMP where I've studied with professional drums tutor such as Gabor Dornyei, Fergus Gerrand, Darren Ashford, Richard Patterson and Jon Harris, with formation in Music Performance, Music Education, Music Technology, Music Business, Arranging & Composing. I have experience with softwares like Logic Pro and Sibelius, can easily sight read charts and have BVs and live arrangement experiences. I am available for sessions, functions, tour, cruises, live and recorded music.

"Boom Boom" by John Lee Hooker
"Born Under A Bad Sign" by Albert King
"Cold Shot" by Stevie Ray Vaughan
"Who Did You Think I Was" by The John Mayer Trio
"Let's Stay Together" by Al Green
"I'd Rather Go Blind" by Etta James
"For Once In My Life" by Stevie Wonder
"You Know I'm No Good" by Amy Winehouse
"What Is And What Should Never Be" by Led Zeppelin
"You Give Love A Bad Name" by Bon Jovi
"Won't Get Fooled Again" by The Who
"All My Life" by Foo Fighters
"Papa's Got A Brand New Bag" by James Brown
"You Got To Funkifize" by Tower Of Power
"Living The Life Of A Dreamer" by Alice Russell
"Warlocks" by Red Hot Chili Peppers
"Car Wash" by Rose Royce
"Everybody Dance" by Chic
"Cosmic Girl" by Jamiroquai
"Don't Be So Hard On Yourself" by Jess Glynne
"The Harder They Come" by Jimmy Cliff
"Could You Be Loved" by Bob Marley
"Too Much Too Young" by The Specials
"Rude" by Magic
"Lovin' All Night" by Patti Loveless
"Somedays You Gotta Dance" by The Dixie Chicks
"Me Neither" by Brad Paisley
"Songs Like This" by Carrie Underwood
"Kids" by Robbie Williams & Kylie Minogue
"Fascination" by Alphabeat
"Feels" by Calvin Harris
"That's What I Like" by Bruno Mars
"Dindi" by Jane Monheit
"Brazilian Love Affair" by George Duke
"The Rhythm Is Gonna Get You" by Gloria Estefan
"Mas Que Nada" by Al Jarreau
"Don't Let Go" by En Vogue
"Used To Love You" by John Legend
"Send It On" by D'Angelo
"The Way" by Jill Scott
"Love Bites (So Do I)" by Halestorm
"I'll See The Light Tonight" by Yngwie Malmsteen
"Hip Today" by Extreme
"Forty-Six & Two" by Tool
"In A Sentimental Mood" by Duke Ellington
"Someday My Prince Will Come" from Snow White and the Seven Dwarfs
"Yesterdays" by Diane Reeves
"How High The Moon" by Morgan Lewis
And much more.

"Giulio and I had several collaborations in the past 3 years in London. We performed live in different venues around the city varying from minimal acoustic set to live band performances. A trusted collaborator of mine, he’s experienced in teaching drums practice and music theory as well as skilled in live arrangements as session player. Never late to our sessions, he is reliable and always committed to reach his goal. I highly recommend his experience as a musician for many projects."

"I hired Giulio as a session musician for one of my recordings. He came highly recommended and was very professional throughout the entire process. Giulio always had constructive ideas and an ear for details. He even went out of his way to help complete my project when covid-19 caused huge complications regarding the recording process. To this day I am entirely satisfied with his work and would love to collaborate again in the future."

"Giulio is punctual, reliable and trustworthy professional. He kindly agreed on playing percussion in a live session for my artist project in 2019 and we really couldn’t do without him. He was always on time and in good spirit when we were rehearsing. His knowledge of theory and the strong sense of rhythm helped to elevate our performance."

"It was amazing playing with Giulio! He learned all our songs so fast and perfectly 😊 not only is he a great musician, he’s also a great human being to rehearse with!"

Giulio depped for a gig of mine in 2019 when my usual drummer was unable to play. He is a great musician and very reliable - he came prepared to every rehearsal and made me feel so relaxed despite the last minute change. Giulio is so trustworthy and lovely to work with, I could not recommend him enough.

I have had the pleasure of working with Giulio since 2017, and from the very first session, his engagement and delivery were on point. As a sound engineer/producer, it's uncommon for me, to see someone with a better mindset and attitude than Giulio's. His skilled musicianship is spiced up with perfect attention to details and deep understanding of the process of making music. Much appreciated and recommended session drummer!