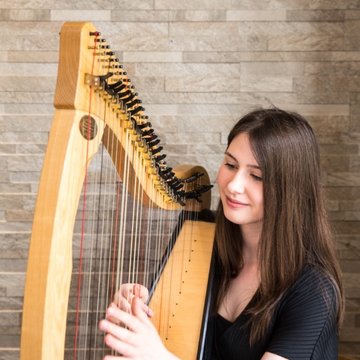 Gina Gallacher is a harpist who has completed her Bachelor of Music degree at the Royal Conservatoire of Scotland, studying with Sharron Griffiths and Pippa Tunnell. She will continue her studies at the Royal Academy of Music in London at the end of 2022. Growing up in Aberdeenshire, she began learning the Clarsach aged 10 and progressed onto the Pedal Harp at the age of 16. Gina has a particular fondness for opera and orchestral music, and has worked with Scottish Opera, Aberdeen Chamber Orchestra, National Youth Orchestra of Scotland and various orchestral projects at the RCS. She has worked under the baton of such eminent conductors as Lionel Friend, Matthew Waldren, Elim Chan, Jessica Cottis and Paul Daniel. Gina has played in many performance venues across Scotland, including the Edinburgh Usher Hall, Dundee Caird Hall and Glasgow Royal Concert Hall. She has performed in masterclasses with renowned harpists such as Isabelle Perrin, Karen Vaughan, Ruth Potter, Gabriella Dall’Olio and Bryn Lewis. Gina is also a keen chamber musician and has enjoyed forming her violin and harp ensemble with her husband Daniel Joseph. Gina is a freelance performer in the North East Scotland. She has played at numerous functions, weddings and several charity events including fundraising concerts for Save the Children and the Archie Foundation.

Gina played at our wedding ceremony recently and was fantastic. Thanks so much for making our day even more special!

Gina was amazing. She played so beautifully and effortlessly. I asked for certain pieces to be played and Gina learnt the music. Everyone commented on how wonderful she was. Really made our big day special. Thank you Gina. You are so talented. X

Hello, I just wanted to send a little message to say a huge thank you for playing on our day. Your music really made our day special.

I just wanted to say thank you so much for taking the time to come and play at our wedding. You were fantastic! Everyone commented on how lovely the music was and we all really enjoyed it. Thank you so much. It was perfect.