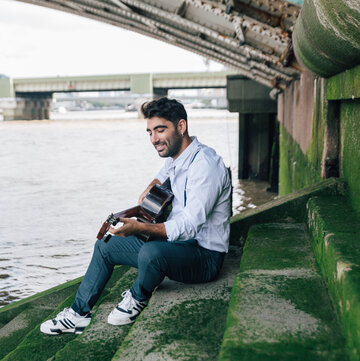 Originally from Sardinia, Gianluigi started playing music at 15 years old after his father gave him his first guitar as a gift. In 2009 he started learning the basics of fingerpicking, and in 2010 he moved to Milan to study jazz guitar at the "Accademia Del Suono" (the Sound Academy). He continued with his studies at the "Luigi Canepa Conservatory" of Sassari in 2011 and focused on refining his modern guitar skills between 2013 and 2014. In his career, he's been part of several projects with different bands. He had the opportunity to perform and refine his knowledge of different styles such as Funk, Fusion, Bossa, RnB, Pop, and Reggae and work on his original compositions. In October 2017, he moved to London, where he regularly performs as a soloist and collaborates in sessions and functions. His specialties are solo classical guitar fingerstyle sets, but he can also play live with a loop station or backing tracks. He spent most of 2018 on a function Cruise gig for P&O Cruise Ships, traveling around Australia and the Pacific Ocean with his Acoustic Duo lineup, formed of Vocals + Acoustic Guitar, playing nightly Pop and Jazz sets. In the second part of 2018, he focused on his private modern guitar and fingerpicking lessons, developing his experimental studying method for children aged 3 to 8 years while being a resident at a private school. This method, aimed at developing psychomotor skills alongside listening, singing, dancing, and drawing activities, is currently being redacted to be published in an educational book. While focusing on his performances and classes in London, he regularly travels between England and Italy. In July 2019, he was one of the two finalists of the "Emerging Guitarist - 2019" competition sponsored by ADGPA in Conegliano. In September, he was one of the four finalists at the "New Sound of Acoustic Music" festival in Cremona. His most recent release is called "Adventure in D," an album where tradition and modernity alternate in a mix of styles, from Classical to Ethnic music, Swing to Bossa, and RnB to World music.

The versatility and the sound. I can play a lot of genres with my guitar and I can use the loop to make everything more interesting.

Depend on the place. Usually half an hour it's enough

Yes I have all my equipment

Yes, we can talk about this. Usually There is a fee of £30 for this service to take into account rehearsal times etc. ”

Standard Prices
All prices include:PA System, rehearsals, etc
Packages
Gianluigi Cruise
I I willing to work on the cruise too, from 1 day to 4 months
£2000

Gianluigi+violin or cajon or both
+£100
Gianluigi

EA
Estefania A
21 days ago

Gianluigi you were fantastic, and both I and my guests enjoyed your performance. You made my engagement memorable.

Thanks a lot Estefania. It was super to play for you. Is there any chance to have some pictures or videos from the day? Thanks again

Gianluigi is a truly magical musician & naturally talented entertainer. His sheer joy & love for his music lit up our daughter's beautiful wedding at The Bingham Riverhouse in Richmond. He created a beautiful atmosphere exactly matching each mood of the moment .... whether it was during the beauty & romance of the Ceremony itself or the funky jazz of the reception after. Gianluigi's versatility is marvellous. He also proved to be the sweetest guy to work with. I have no hesitation in recommending this wonderful musician if you wish to create a very special event. Gianluigi, Thank you! Clare Ridge.

Music that comes from the heart