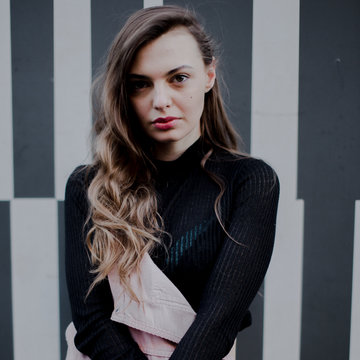 Performing solo on just an acoustic guitar and vocals she has gone on to play a host of live dates across the country as a solo artist. She has performed for Andrew Lloyd Webber at his West End theatre 'The Other Palace' where she's a regular featured artist and provided backing vocals for chart topping recording artist Jamie Lawson. Gia performed on the Radio 1 Dance Stage at both Reading and Leeds Festivals 2018 as a featured artist with producer Draper. She has also worked on TV and soundtrack projects with Sony BMG, MTV and Universal Music. With her soulful vocals and infectious energy Gia has also caught the attention of Grammy award-winning producer Will Hicks (recent collaborations include Beyonce, Anne-Marie and Ed Sheeran) and the pair have started work on her own debut singles. A dedicated working artist, she is a popular booking for weddings, parties, bars and corporate events. Recent clients include YPO at Surf Snowdonia, The Other Palace Theatre, Goldsmiths University and many private parties. Her set of covers encompasses a wide range of classics and modern gems in pop with her soulful vocals giving the songs a unique twist. She tailors her sets to suit the crowd where possible and each performance is 100% live with no backing tracks. Special requests are welcome with advance notice.

My setup is usually straight forward and quick. Usually no more than 20 - 30 mins including load-in and levels check.

I put a lot of time into crafting my setlists to create the perfect atmosphere for your event. However if you have any requests I'm more than happy to chat about them with you and accommodate where possible.

Yes. I supply my own PA system and instrument.

Requests are welcome with a bit of notice. Be aware that as a solo acoustic performer some songs aren't always suitable to my style of performance. A fee may be applicable if significant rehearsal time is required.

Standard Prices
All prices include:PA equipment. If you're looking for a topliner or session vocalist please enquire for a quote.
Gia October

MJ
Mark J
2 years ago, for a Wedding in Shrewsbury

What a find! Genuine talent, beautiful voice, really friendly and a true professional. I generally don’t post reviews but feel compelled to do so for Gia as she made our special day even more incredible. She was fantastic on the day - and so many guests commented on how great she was. Would highly recommend her to anyone looking for an act to add something special on their important occasion. Thanks Gia!

RW
Rebecca W
3 years ago, for a Wedding in Former St Winifred's Church

Gia performed at our wedding ceremony and her voice was absolutely stunning! We were very impressed with her voice on the clips we had seen, but in real life she made the hairs on the back of your neck stand up. We had soooooo many comments about how wonderful she was and the selection of songs. She made our day, it would not have been the same without her. We can’t wait for her to become famous so we can brag about having her at our wedding!