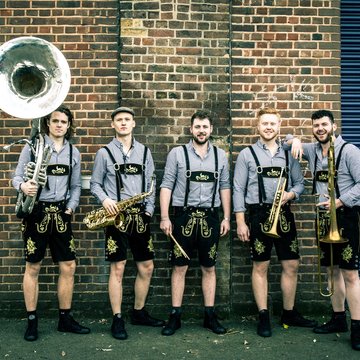 Introducing German Jukebox. A collective made up of 5 of the top session musicians in the UK. German Jukebox are a young, fresh and vibrant group that have taken the Oompah scene by storm. They specialise in putting on nights you'll be talking about for years to come with their performances containing renditions of popular songs played in an oompah style alongside hilarious games to get the audience involved. Of course, the band will be dressed to impress in full leiderhosen outfits. German Jukebox's live show features a high energy performance with every aspect tailor made to suit the needs of your event.  Audience interaction is fundamental to the show, the band thrive off the audiences energy and will throw it right back at you until the night is over... (with the help of a stein or two) Every member of the band is a virtuoso performer. German Jukebox musicians have performed on almost every continent of the world alongside some of the biggest names in the music industry with appearances at major UK festivals including Glastonbury, Bestival, Reading & Leeds, regular performances in London's West-End shows and  they have played at many of the leading venues around the world including Wembley Stadium, o2 Arena, Royal Albert Hall alongside numerous appearances on national TV and radio.  To ensure the party doesn't stop between sets, a playlist DJ service designed specifically to fit the German Jukebox vibe is provided as standard, with the option to upgrade to a professional DJ service for the full party experience. German Jukebox are available for events all around the UK and internationally including private parties, corporate events and weddings. Some of the most popular requests are for apres ski, beer festivals, Oktoberfest style parties, product launches and guest appearances to name a few.

Ain't Nobody
All Star
Angels
Beyonce Medley
Can't Feel My Face
Come On Eileen
Country Roads
Don't You Want Me
Everybody
Freed From Desire
Happy
Hey Ya!
Human
I Wanna Dance With Somebody
Ignition - Remix
Living On A Prayer
No Diggity
Reach
Rolling In The Deep
Shut Up And Dance
Survive
Sweet Caroline
Take On Me
Talk Dirty
Thrift Shop
Toxic
Under The Sea
Customer questions

Yes. We can offer smaller line ups when required... Or even add performers.

We are very flexible. But do let us know ASAP.

If performing with a sound system. 60 mins minimum.

No problem. We are also happy to arrange one song of your choice.

We booked German Jukebox for our office party. They were a great group of guys. The music was great and they had everybody up dancing. Would definitely recommend

HB
Hannah B
1 year ago

This band! Words cannot describe how amazing they were for our evening entertainment at our wedding. I would even say they were the highlight of the whole day! So many of our guests said how brilliant they were and enjoyed all they songs they played. We also had the DJ as part of our package and again so many comments about the selection of music on the night. This was also perfect for in between and after the band set. From start to finish, the communication with James was outstanding. Including the tricky rearrangement due to postponing because of covid. We would highly recommend this band and DJ for your event! You will sure be in for a great party! Thank you for being apart of our special day. Hannah & Ben

What a fantastic experience - we really can't fault anything about James and the band. We had the band for 2 hour for our wedding (10/7/21), the music and performance was excellent and entertaining with lots of classic Oompah songs as well as requests. The band were exceptional on the day but also in the build up (especially considering the challenges of getting married in a pandemic). They were friendly and flexible and James was often in contact to keep us up to date and check in with our plans. They adapted on the day to suit the venue, weather, and crowd and also went above and beyond by helping me with a joke in my speech! Our guests gave us loads of great feedback about the band with plenty commenting on it being the best entertainment they have had at a wedding (and we agree)! We will certainly be recommending them to friends and family and hopefully get the chance to meet them again in the future! Thanks again! Liv and Stefan

Wow! These guys were fantastic! Hired them for our wedding entertainment and couldn't have asked for more - worth every penny! Thanks guys, everyone loved you!

LB
Lois B
3 years ago, for a Christmas party in Derby

Hi guys, Just a quick one to say you completely made our night! I will be sure to tell everyone about you. Thanks so so much!!! XX

FH
Fern H
3 years ago, for a Birthday party in Dartford

I booked German Jukebox for my boyfriend's birthday party and they really made the night! There was a mix of age groups and the song choices made sure everyone was up and dancing. They were full of energy and helpful and they even played happy birthday at the end of the night. Great band, would highly recommend!