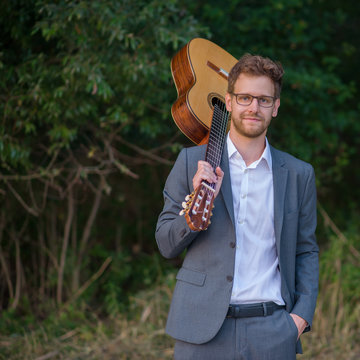 Classical guitarist, currently based in London.
3 of 4 photos
Guitarist
London

I started to play the guitar at the age of 8 in Budapest, Hungary. In 2011 I was admitted to the Mozarteum University in Salzburg, Austria, where I studied BA in classical guitar performance and i music-pedagogy with focus on jazz- and popularmusic. I received my degrees with honour in 2015 and 2016. In 2017-2018 i was studying at the Guildhall School of Music and Drama in London, UK, under the tuition of Robert Brightmore, with Erasmus scholarship. Already from his teenage years, I have been playing in several music groups. The most important of these is the Bachstage trio, which I founded with a jazz pianist and a double bass player. We arrange and play jazz versions of classical music pieces. Our debut CD came out in 2013. I am is constantly taking part in many interesting music projects and giving concerts in Europe, while also performing at wedding and other functions. I played for example on the St. Paul's School Fundraiser, on the Dinner of Masters and Clerks of the City of London in the presence of the bishop of London, and on wedding in and around London, for instance in the Barbican Conservatory. I am looking forward to have the chance to play on further exciting events!

It is okay, just please let me know in time, and I will ensure that everything runs smoothly with the new timings as well.

If I am using my own amplification (if I need to be amplified at all), I just need time for a quick soundcheck, which shouldn't take more than 10-15 minutes. If I play acoustically, it takes even less.

On my set list there are songs and pieces from lots of types of music, crafted in a way that it is versatile, interesting and fun. It always worked perfectly the way I played them, but of course if you have any suggestions, I am happy to talk about it!

If you do let me know in time, I can. On weddings I always play a classical guitar arrangement of a chosen, favorite song of the couple, as a gift!

That I can add the small extra thing to make the atmosphere of the event perfect with my classical guitar playing, and with my mix of pop and jazz song arrangement and classical pieces.

Most of the classical guitarists, South-American guitar players and composers.

I once played for the Bishop of London! But all the gigs I performed were perfect and high profile in their own way.

Perfect music for the drinks reception!

...we enjoyed some entertainment by Gergely Bandi, a Guildhall student, who gave a lovely rendition on the classical guitar...

Gergely provided beautiful music for the ceremony and made the moment perfect! I can only suggest him!