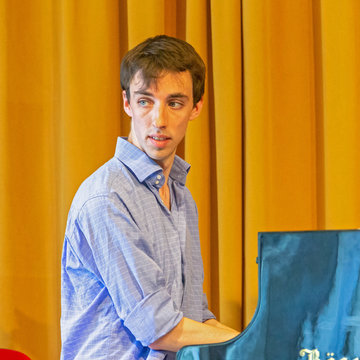 George is currently studying for an MMus in Piano Performance at the Royal Northern College of Music, where his teacher is Helen Krizos. His studies have been generously supported by the Oglesby Charitable Trust Scholarship, the Drapers’ Music Scholarship, the William and Frances Dobie Charitable Foundation, and postgraduate awards from the Countess of Munster Musical Trust and Help Musicians UK. He was awarded the Emmanuel Prize at the end of his first academic year. George maintains a busy schedule of solo recital engagements and collaborative projects with singers and instrumentalists throughout the UK. He was awarded the accompanist’s prize at the 2018 AESS Courtney Kenny Song Competition. During his first term at RNCM he was highly commended in the Beethoven Piano Sonata Prize, and was named an RNCM Songster, giving him performance and masterclass opportunities throughout the North of England. In 2018 George graduated from Oxford University with first-class honours in Music. Whilst studying at St Peter’s College, where he held an academic scholarship, he continued to take regular piano lessons with Sam Armstrong in London. As well as regular recital appearances in such venues as the Jacqueline du Pré Music Building and the Holywell Music Room, significant performances in Oxford included Beethoven’s third piano concerto. At the age of sixteen he joined the Junior Department of the Trinity Laban Conservatoire, where he would win numerous prizes in piano. In 2015 he joined the National Youth Orchestra of Great Britain as orchestral pianist for their spring residency and concert tour, performing at the Sage Gateshead and the Royal Festival Hall, including a live broadcast on BBC Radio 3. One month previously he made his London concerto debut with Saint-Saëns’ Piano Concerto No 2. He has an LRSM, with distinction, in piano performance. George has been privileged enough to have participated in masterclasses with such distinguished pianists as Stephen Kovacevich, Lars Vogt, Katya Apekisheva and Philippe Cassard. In 2019, as a Leeds Lieder Festival Young Artist and student of the Franz-Schubert-Institut in Baden-bei-Wien, he has participated in Lieder masterclasses with Malcolm Martineau, Roger Vignoles, Julius Drake, Helmut Deutsch and Wolfram Rieger, amongst others.

George has a wonderful way of engaging with the audience, both in words and in music. He gave a lovely performance and was extremely professional in all aspects of the engagement.

CS
Claire S
4 years ago, for a Concert in New Inn Hall St

TO
The R
6 years ago

George Needham also deserves mention for his sensitive and stylistic continuo-playing; ever-responsive to the subtle inflections of Nurse and Davies.