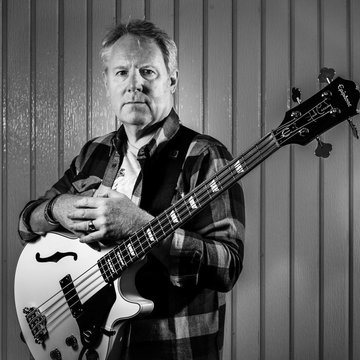 Geoff started out playing guitar in various folk groups back in the early 80’s. Having established that he was no good at that, he switched to bass and was a founder member of a successful 3-piece band with Dave Behennah & Lee Knights in Night After Night – the band won a Musician Union Battle of the Bands Regional final and only lost out in the SW Final due to the expenses being paid up front and the bar being open early. Their most notable gig was probably playing the same stage as Tina Turner at the Cornwall Coliseum – unfortunately Tina was there a mere week before Geoff was. Next stop was eighties cover band Driven By Italians, which not surprisingly had a huge following of Italian language students in Plymouth, with the drummer at the time eventually marrying an Italian girl and moving to Italy. A switch back to folk music beckoned, and Geoff was a founder member, along with well known local fiddle player Steve Potter, of folk/rock ceilidh band Eddie and the Lighthouses, whose main claim to fame was opening the Elephant Fayre Folk Festival held in St Germans in the 80’s. In the mid 80’s, Geoff teamed up again with Dave Behennah to form a duo, The Chosen Two, clocking up a respectable 150 gigs a year playing around clubs and holiday camps throughout the South West. Geoff has continued a loose partnership with Dave Behennah to the present day, contributing to a number Dave’s recordings and would admit to having been a Banarette. In 1995 he joined Time & Motion, for once being the youngest member of a band, staying with this long running group for over 6 years until the band folded. A brief stint with an Exeter-based band called Smiler followed (he first came across Paul Matthew here, when Paul auditioned for the band), and when that band folded he spent a number of years in a relative musical wilderness, picking up the odd dep gig here and there. In 2007 he was asked to form a new band based just over the water in Torpoint – Shoreline picked up a few gigs here and there, but this period was more notable for the first meeting of Geoff, Dean & Paul. Sam joined in 2008 after answering an ad placed in a music shop window and deciBelle evolved from that moment. still going strong in 2016, the band are now a firm favourite on the wedding/function gig circuit in the South West. In 2015, Geoff teamed up again with Dave Behennah and with the addition of drummer, Keith Russell, formed a new 3 piece band, The LadyKillers

We had a fantastic night watching 13 Guns. Their energy and attention to detail was superb, with the band playing a mixture of covers and originals. Loud and unleashed, 13 Guns are your band for a rocking night!

Another excellent Sunday Session by the Ladykillers - great entertainment by 3 top musicians at their best. Everyone went home with a smile on their face.

Verified
Tom A, 3 years ago

The Ladykillers kindly agreed to play at our festival, held in support of the rehabilitation of injured servicemen men - rock2recovery. They played an excellent 60 min set which really set the tone for the whole festival and we will be rebooking them.

lan and I just wanted to say a huge thank you to you and the band for playing at our wedding on the 2nd June. You guys were fantastic - I think just about everyone danced at some point and your choice of tunes was spot on - not to mention the fact that both Sam and Jo have such amazing voices!!! You definitely have a few more fans now - lots of people have been asking for your website address so they can find out your gig dates!!! Once again - thank you - you guys have been so professional throughout and worth every penny!"

Steve I, 7 years ago

Thanks for a fab night!!!! you were great and can't wait for the next gig!!! The pub was drunk dry that night :-)"

I follow live local music in Plymouth, but have got to say, we were blown away to have you guys play for us at our Wedding bash last Friday night. You and your fellow band mates professionalism and music choice were first class. Everybody I have spoken to, who attended, were saying the same "what a fantastic band". Thanks again and hope to see you along with some new fans down the Lord Louis on Saturday.

We booked Decibelle for our daughter's wedding reception having viewed their info on the internet & seen them perform at Lord Louis in Plympton. The band were happy to play a set which met our requirements which included a brilliant version of "Beat It" by Michael Jackson (great guitar solo) and the Kings of Leon iconic "Sex on Fire" which had everyone "singing" at the top of their voices! The lady vocalist has a brilliant and powerful voice and the band have a broad range of styles to choose from with all members being accomplished musicians. Although our venue was quite small I would imagine they would also sound great on a larger stage and I received several comments from guests about how great the entertainment was. Little 'extra' things helped make 'just another band wedding gig' into something really quite special, such as being able to accommodate my son who played the "first dance" on his own guitar as well as ensuring quality sound production throughout by coming with a decent sound system & lighting set and - during their break - in continuing to put their clients first by allowing my daughter play some recorded tunes through 'their' system from her I-Pod to keep the party going! I would highly recommend Decibelle to anyone looking to book an all round entertaining and professional band for their private function or event be it large or small. Thanks

Hi Geoff, Dean and the rest of deciBelle, WOW!! You guys were brilliant on Saturday at our wedding. We could not have asked for anything more. Thank you so much, everything was perfect from the outfits you wore, your professionalism and, of course, the songs you played and the way you played them was so on point for the occasion. The dance floor was packed at all times, at times, with so pretty crazy 'dance' moves - this is a reflection on you. I hope that you all enjoyed the performance and I will happily recommend you anyone in the future. Thanks again for helping us have the most perfect of wedding days." , Private Function

DeciBelle performed at our wedding last week and did not disappoint, the dance floor was buzzing and everyone commented on how good they were. They perform a wide range of music suitable for a variety of ages. DeciBelle also performed for our first dance, which was 'spot on'! I would thoroughly recommend this band. Thank you x

Decibelle played at our charity ball on Saturday 14th October and were fabulous, extremely helpful and accommodating, would highly recommend. People on the dance floor from the first song and the floor was filled until the end of the evening a sign of good music. We hope to be able to use them again at our next ball!!!!

Wow!! DeciBelle played at our wedding on Saturday and from start to finish they did an amazing job!! We wanted a band who could play a variety of different genres and these guys did just that. The DeciBelles got everyone dancing and performed great songs. It was fantastic to see not only the crowd enjoying them but also seeing them enjoy performing!! Thank you once again and will be keeping an eye out on future events.

Fantastic! I booked Decibelle to play at a corporate summer party I was hosting and what a fab job they did. They really got the party atmosphere going with a great selection of tunes. They were completely professional from booking right through to their performance. I will definitely book them again for future events. Thanks very much guys!