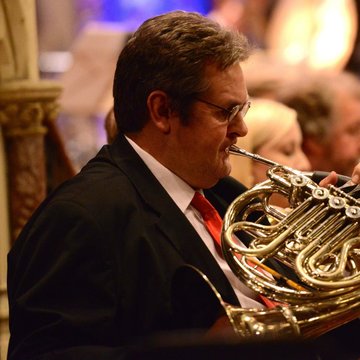 Superb player with over 40 years of experience performing at all levels, from Orchestras to Wind Bands and everything in between

Started learning French horn at the age of 11 at Temple School for Boys in Strood, Kent. Taught by Steve Migden there before moving away to North London at the age of 15. Joined the Band of the Irish Guards at 19 as 6th Horn. Was later made principle after only 3 years, the youngest ever to be made principle. Served for 22 years, touring the world and playing in all the major venues in England and many abroad. These included, the CNE in Toronto, massive concert in Perth WA, the America's Cup in Rhode Island and many, many more. Since finishing my service in 2002 I have played with many first class amateur Orchestras based in the South East. These include, Royal Tunbridge Wells Symphony Orchestra, Horsham Symphony Orchestra, Bromley Symphony Orchestra, London Musical Theatre Orchestra and Croydon Symphony orchestra.

Gary is competent, friendly and helpful.

Verified
Roy B, 3 years ago

Gary is first on my list of players to ask to join my horn section in the Bromley Symphony Orchestra as both a dep and on the occasions we need big horn sections because his enthusiasm for playing and his skill in his craft speaks for itself.

Gary is a top-notch bloke and fab musician. He's a regular member of the Horsham Symphony Orchestra, where the entire horn section is consistently brilliant. Gary's tuning and musicianship are excellent and he brings real soul to his music. He's dependable, fun to be around and will make your event truly memorable. Book him quick!

French Horns in the UK