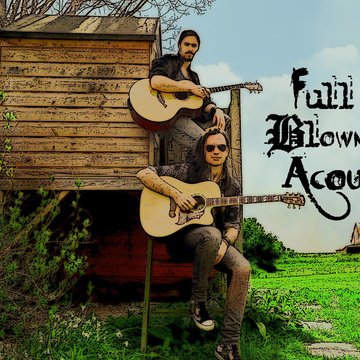 Gadd (- Vocalist for Heavy Metal band Night Screamer) and Andy Basiola (- Guitarist for Hard Rock band Future Shock) join forces to form one of London’s top acoustic covers band with original acoustic arrangements to all time Rock, POP and other classics from throughout the ages including - Queen, Michael Jackson, Bon Jovi, GnR etc. (You know, the good stuff)! Book to see them live as their British invasion starts.. NOW!

We Will Rock You
We Are The Champions
I Want It All
I Want to Break Free
Show Must Go On
Keep On Rocking in The Free World
Jeremy
Pretender
Sweet Child
Welcome to The Jungle
Johnny B. Good
Blue Suede Shoes
Rocking All Over the World
La Bamba
Folsom Prison Blues
Rock and Roll
Immigrant Song
Stairway to Heaven
Life On Mars
Changes
I Kissed a Girl
Careless Whisper
Last Christmas
Wake Me Up before you Go Go
Under The Bridge
Free Falling
Black Hole Sun
Always
Wanted Dead or Alive
Living on a Prayer
Blaze of Glory
Final Countdown
Thunderstruck
High Way To Hell
All Right Now
Are You Gonna Be My Girl
Purple Rain
Madness
Still Haven't Found What I'm Looking For
Zombie
Drunken Lullabies
What's Left of the Flag
Shipping Up to Boston
Whiskey in a Jar
Love in An Elevator
Cryin'
Rag Doll
Rebel Yell
Uptown Funk
And more!!!

These guys rock! I am the promoter at Slim Jim's Liquor Store and I highly recommend these guys, a safe bet when you want the crowed at your bar to sing along with the band, they really know how to interact with the public Great selection of music covered by amazing musicians.

“One of the best rock voices I’ve heard!”